It amazes me how much cultural immersion can happen in just 10 days.

Knowing I just scratched the surface, I feel like I have so much more understanding of the cultural life in Morocco after traveling on the Center Stage Advance Trip this past March. It being my first trip to Africa, I knew that any ideas about the country would be obliterated as soon as I stepped off the plane. So I was not surprised when that was exactly what happened.

My very basic and mostly forgotten French lessons left me heavily reliant on translators. What a tremendous support it was to have the Assistant Cultural Affairs Office, Sam Werberg, and his staff from the U.S. Embassy with us throughout our 10-day road trip from Rabat through the Atlas mountains to the seaside resort city of Agidir, north to the ancient city of Marrakech and then on to Casablanca. The staff at NEFA and Lisa Booth Management did a marvelous job of pulling together a very compatible and very musical group of travelers, including Arieb Azhar, a musician who participated in the Pilot Round of Center Stage. We had a van full of stories and song -- hours and hours of songs, from Sufi folk songs from Punjab and the Appalachian mountains to Motown, from a Broadway show to Paul Simon; it was marvelous. 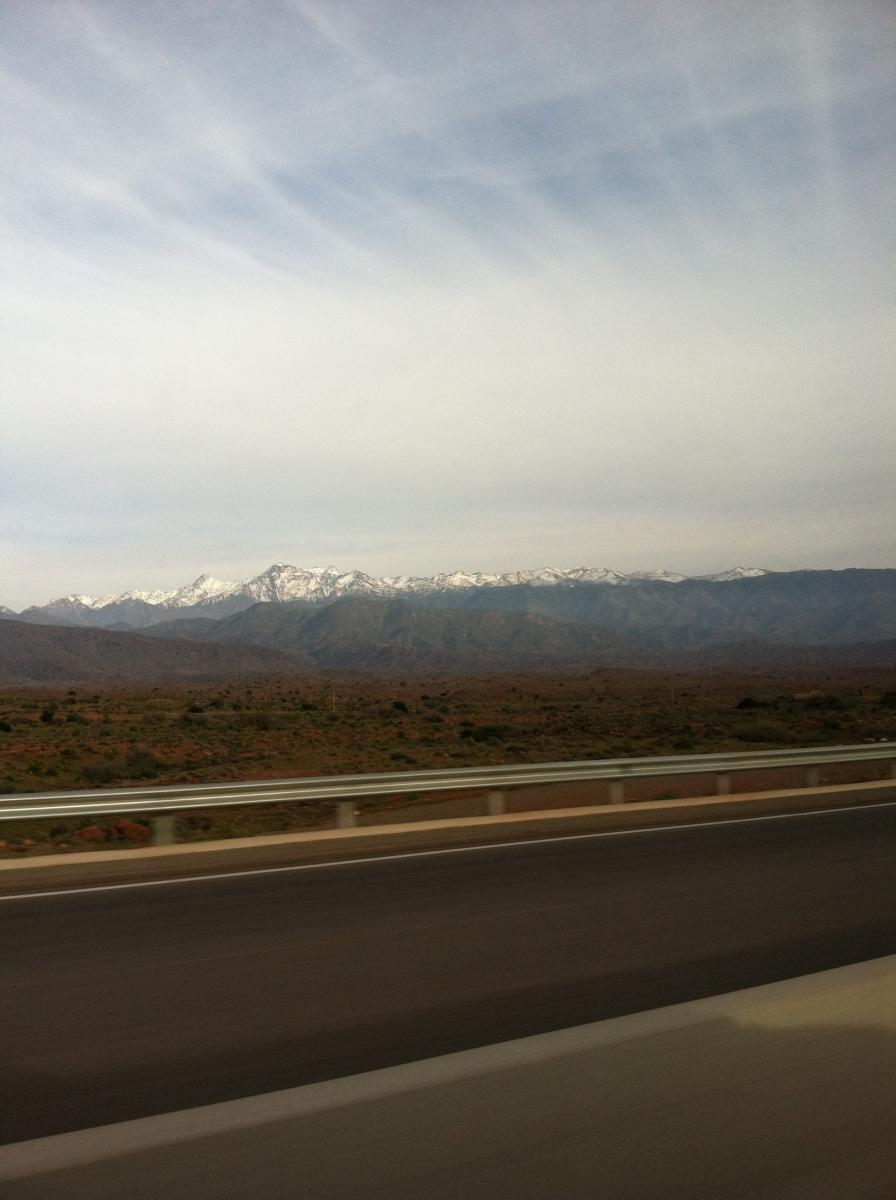 The days were full of opportunities to interact with musicians and the people who bring artists, audiences and students together -- producers, directors, dancers, teachers. Even though a basic structure outlined our travels, everyone was game for adding and shifting to allow for unexpected opportunities -- and there were many. Musicians would recommend we meet and hear other musicians, tours of facilities introduced us to the many ways in which the artists learn their craft and how they present it. Sure there were lots of similarities to the U.S. models, but the differences really opened my eyes. 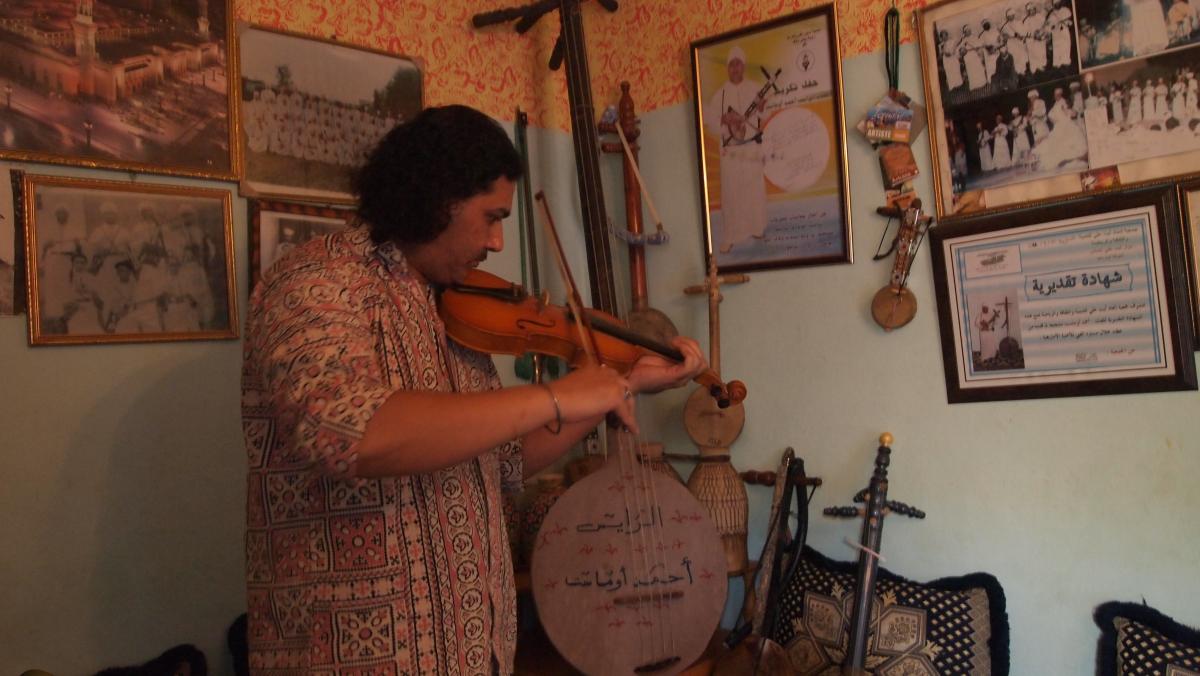 Arieb Azhar playing with instruments at an artist's home. 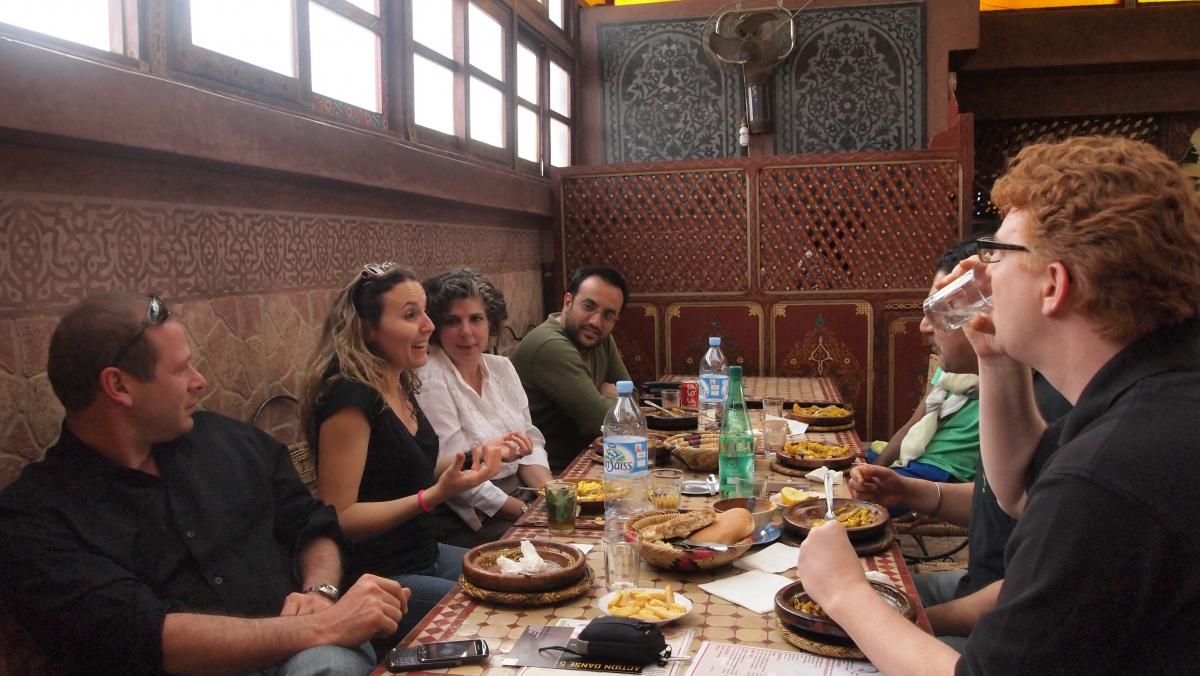 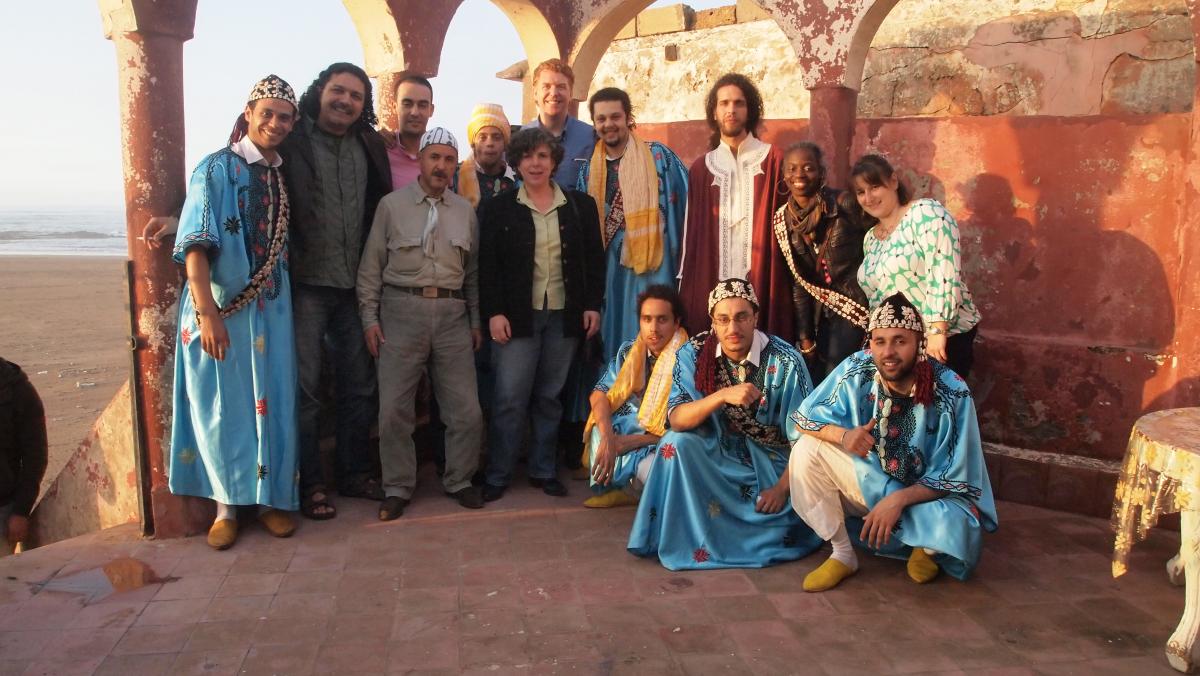 There were also musical styles that I had not expected to hear. Hearing Moroccan-influences heavy metal music was possibly the most surprising -- probably more accurate to call it heavy metal-influenced Moroccan music. It truly was its own thing. 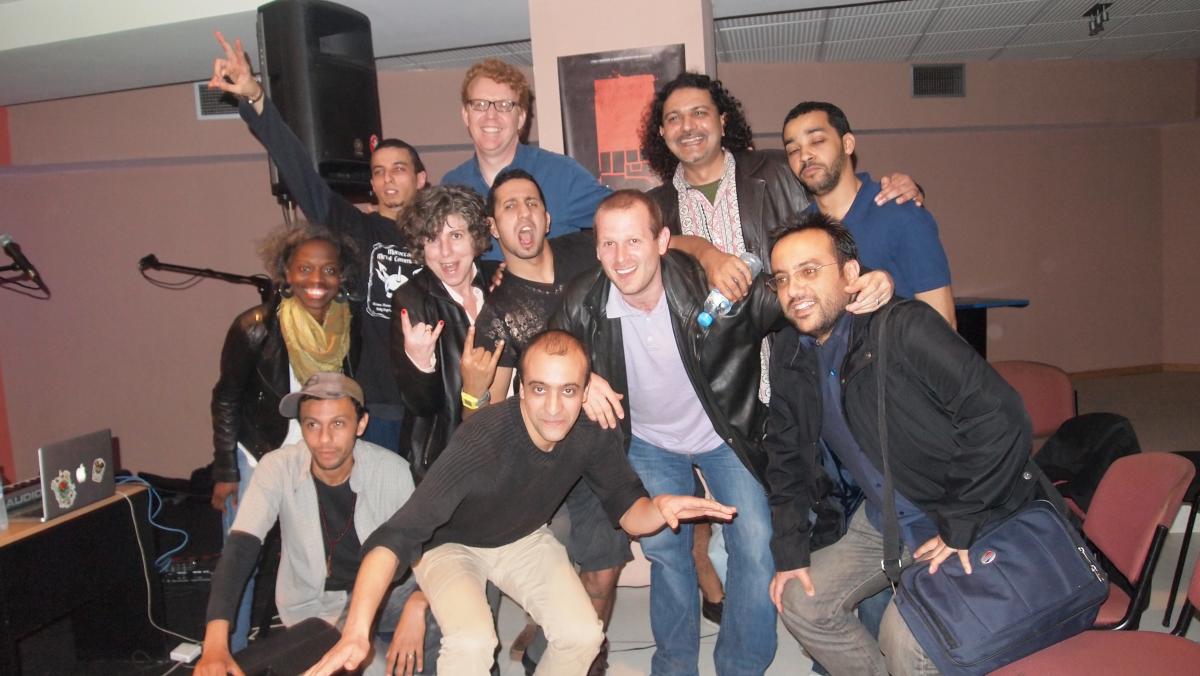 The Center Stage team with Haoussa.

The Moroccan people we met were abundantly generous with their time, talents, and hospitality. I don't believe I have ever been introduced to so many new foods, new spices, and new cookware in such a concentrated period of time. The medinas -- the famous old walled cities within cities -- were an explosion of activity. The marketplaces were teeming with life. The best food was what we experienced in the heart of the marketplace. Everything was fresh and full of flavor. I can't being to address my new olive addiction. Fortunately it's impossible to get like in such quantities in the States! 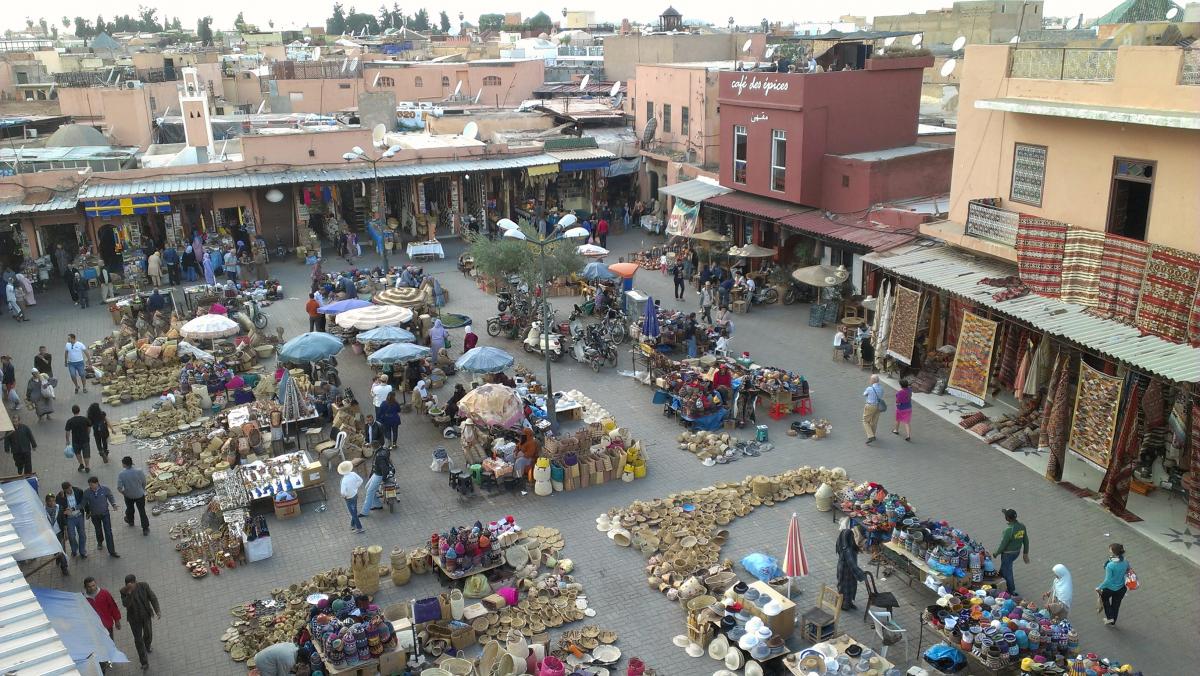 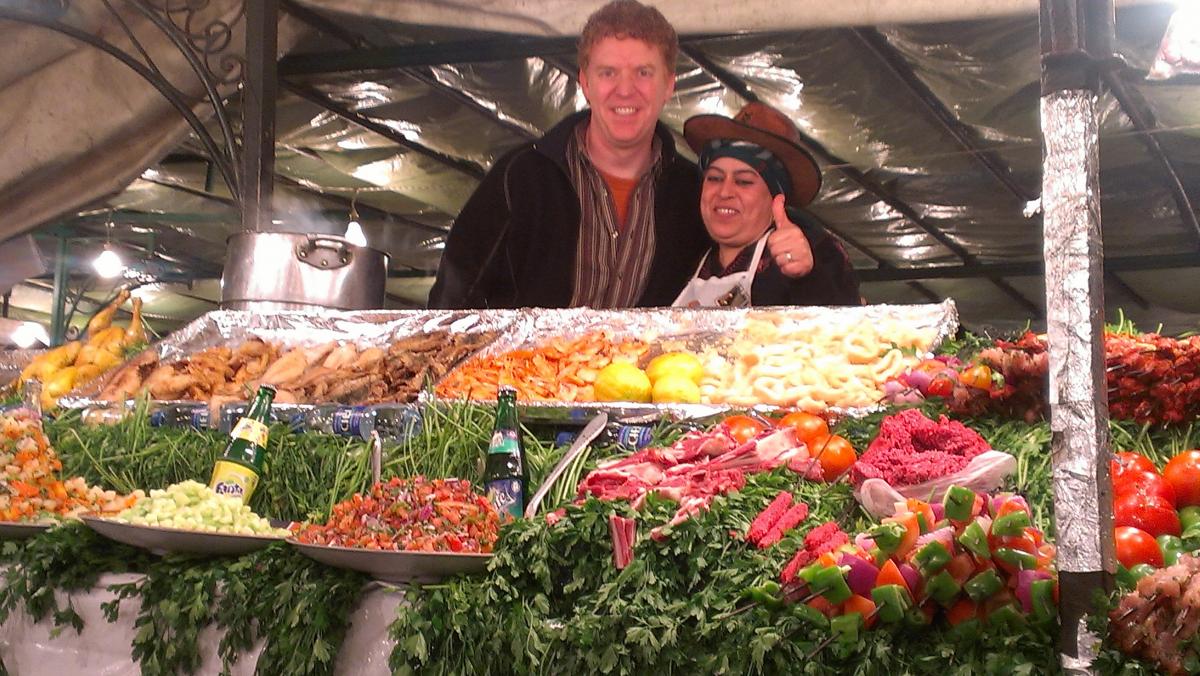 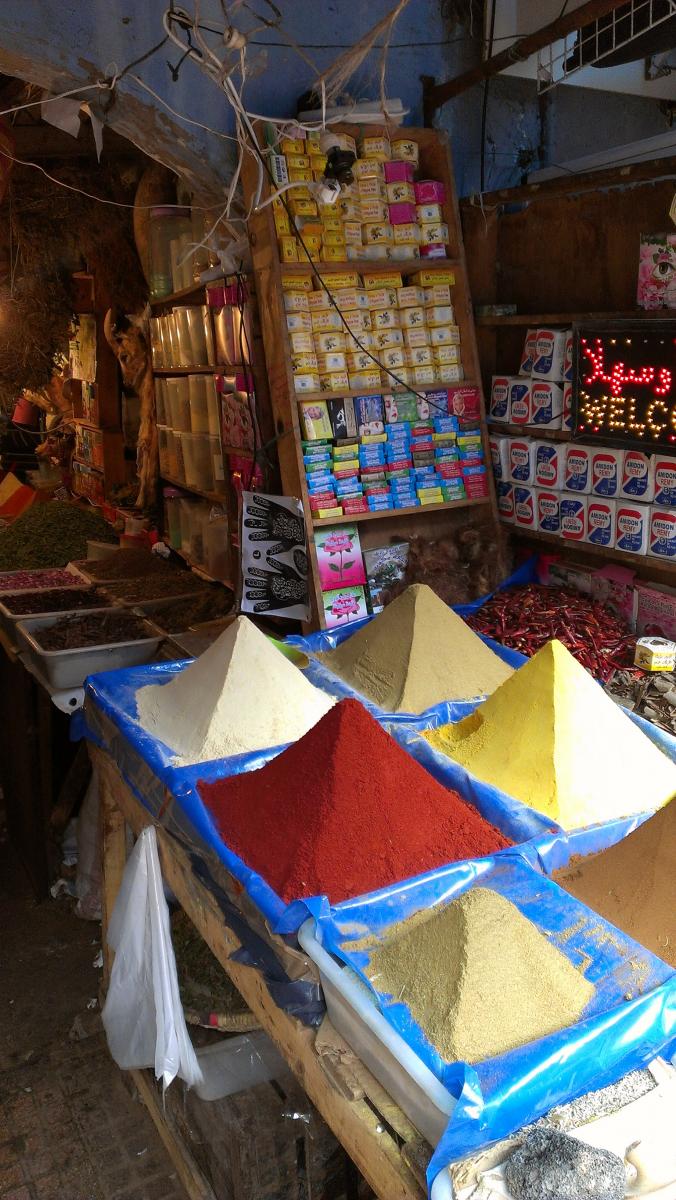 I send a sincere thank you to everyone who worked so hard to make this trip possible and so successful. My travel companions were amazing and I'm thrilled for all the new friends I have made. I am overflowing with ideas around international exchange and look forward to sharing them with my home community and professional colleagues. 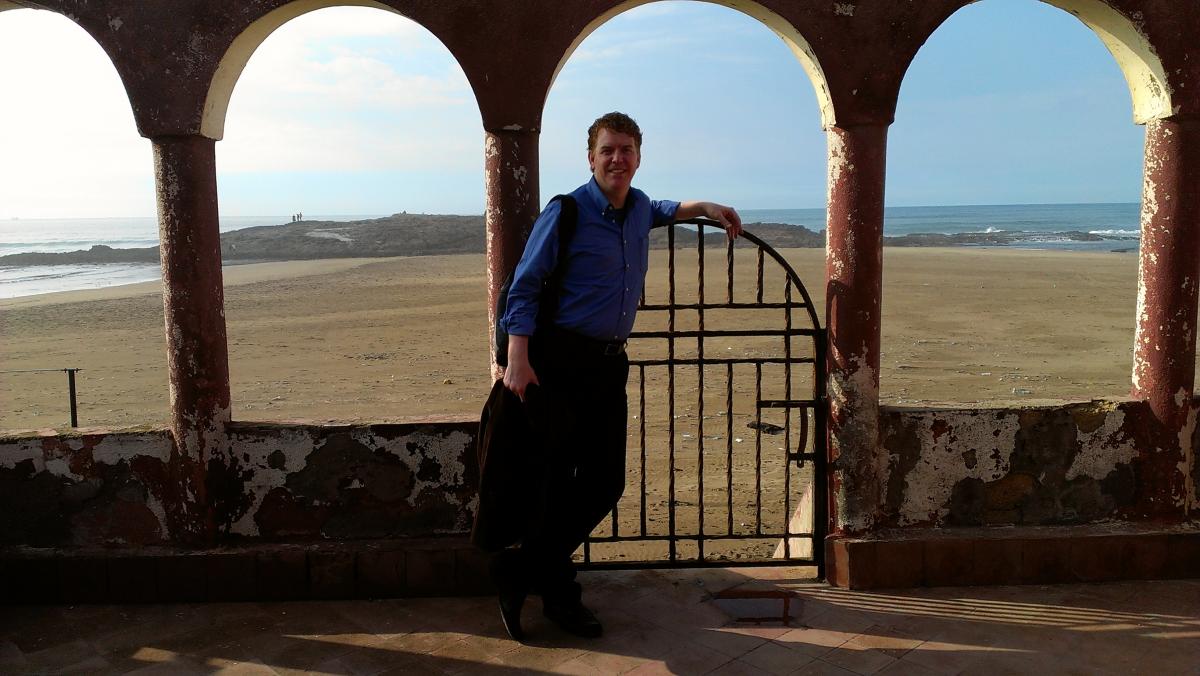