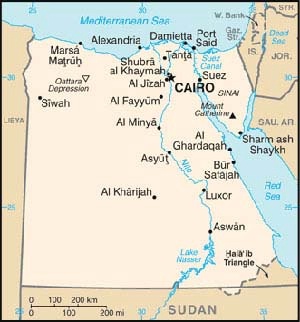 Egypt, officially the Arab Republic of Egypt, is a transcontinental country spanning the northeast corner of Africa and southwest corner of Asia by a land bridge formed by the Sinai Peninsula. Egypt is a Mediterranean country bordered by the Gaza Strip and Israel to the northeast, the Gulf of Aqaba to the east, the Red Sea to the east and south, Sudan to the south, and Libya to the west. Across the Gulf of Aqaba lies Jordan, and across from the Sinai Peninsula lies Saudi Arabia, although Jordan and Saudi Arabia do not share a land border with Egypt.

Egypt has one of the longest histories of any modern country, emerging as one of the world's first nation states in the tenth millennium BC. Considered a cradle of civilisation, Ancient Egypt experienced some of the earliest developments of writing, agriculture, urbanisation, organised religion and central government. Iconic monuments such as the Giza Necropolis and its Great Sphinx, as well the ruins of Memphis, Thebes, Karnak, and the Valley of the Kings, reflect this legacy and remain a significant focus of archaeological study and popular interest worldwide. Egypt's rich cultural heritage is an integral part of its national identity, which has endured, and at times assimilated, various foreign influences, including Greek, Persian, Roman, Arab, Ottoman, and European. One of the earliest centres of Christianity, Egypt was Islamised in the seventh century and remains a predominantly Muslim country, albeit with a significant number of Christians.

With over 92 million inhabitants, Egypt is the most populous country in North Africa and the Arab world, the third-most populous in Africa (after Nigeria and Ethiopia), and the fifteenth-most populous in the world. The great majority of its people live near the banks of the Nile River, an area of about 40,000 square kilometres (15,000 sq mi), where the only arable land is found. The large regions of the Sahara desert, which constitute most of Egypt's territory, are sparsely inhabited. About half of Egypt's residents live in urban areas, with most spread across the densely populated centres of greater Cairo, Alexandria and other major cities in the Nile Delta.

Egypt is a recognised cultural trend-setter of the Arabic-speaking world. Contemporary Arabic and Middle-Eastern culture is heavily influenced by Egyptian literature, music, film and television. Egypt gained a regional leadership role during the 1950s and 1960s, giving a further enduring boost to the standing of Egyptian culture in the Arabic-speaking world.
(via Wikipedia)