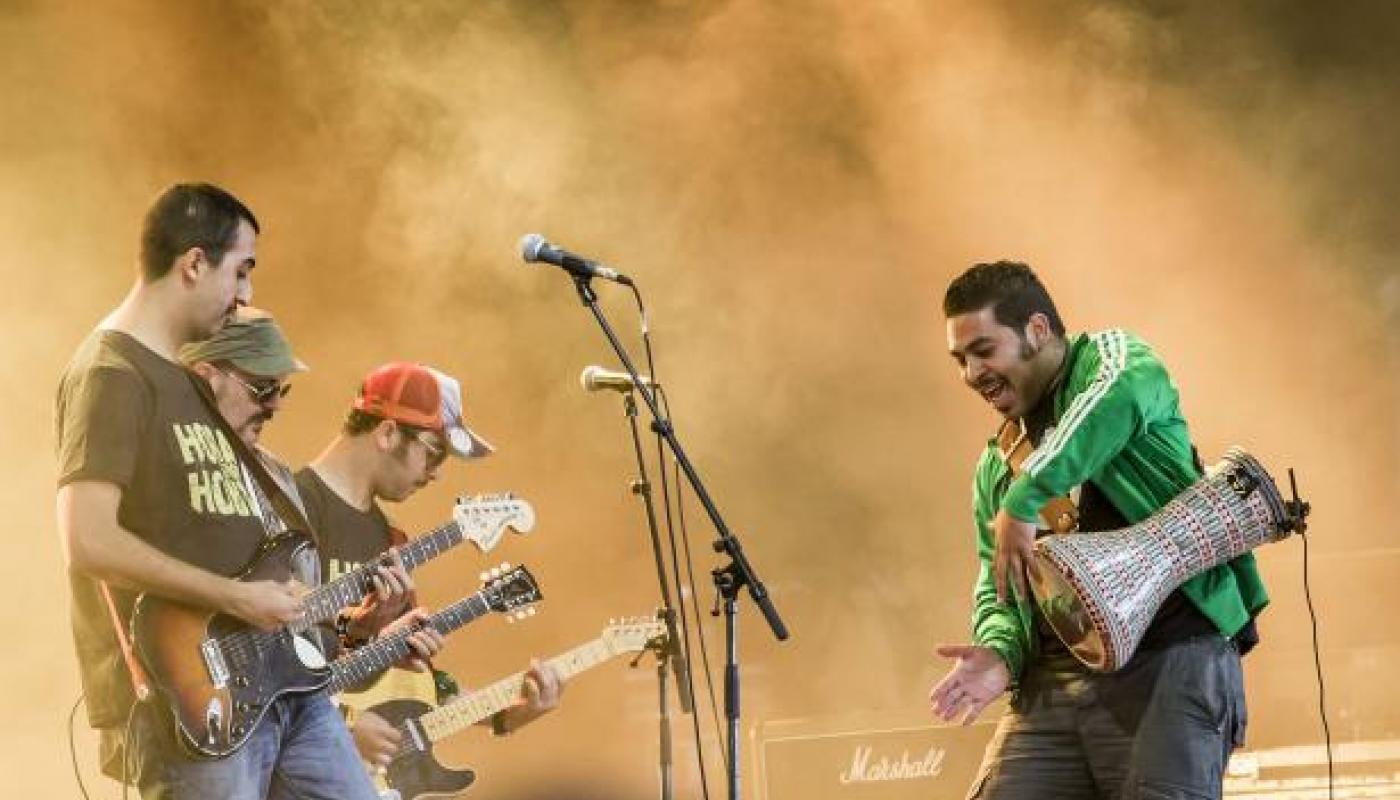 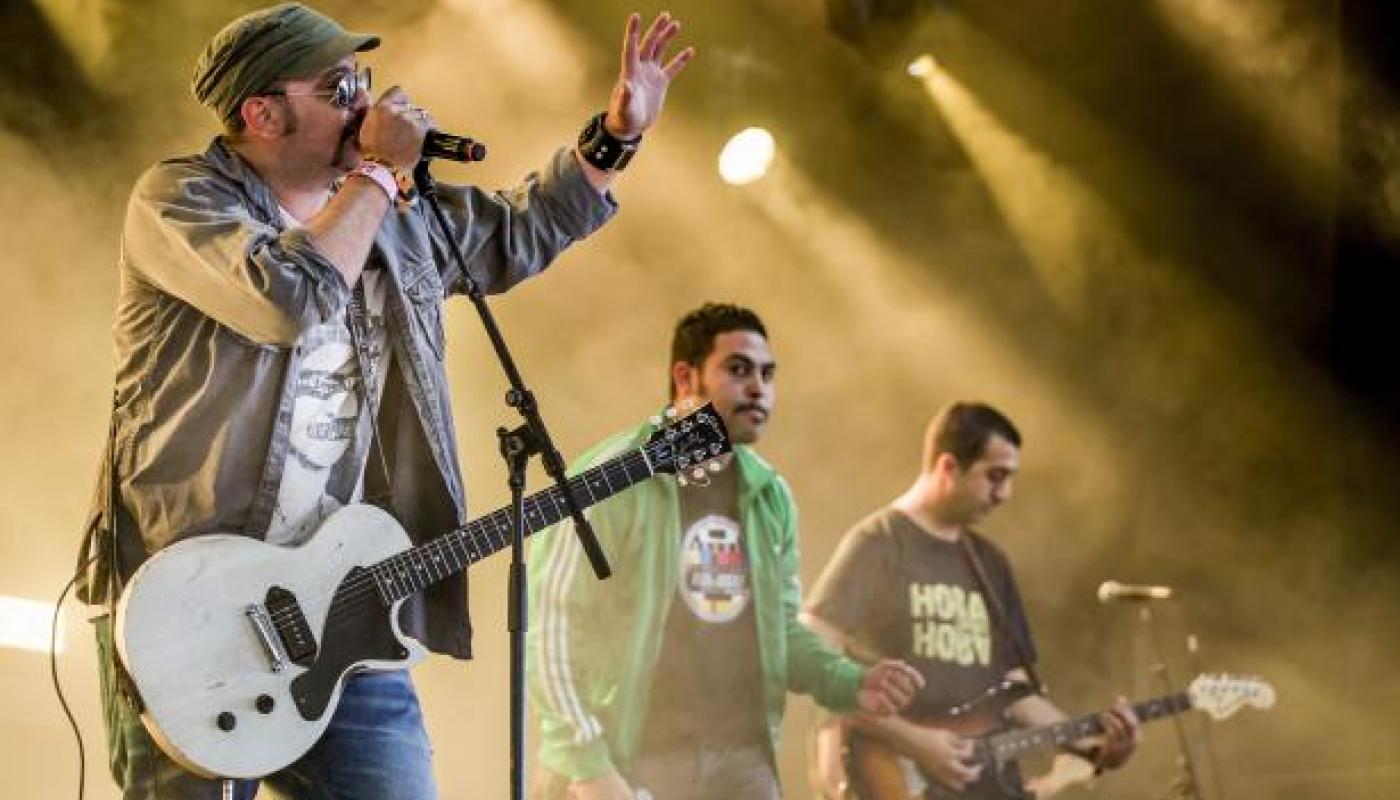 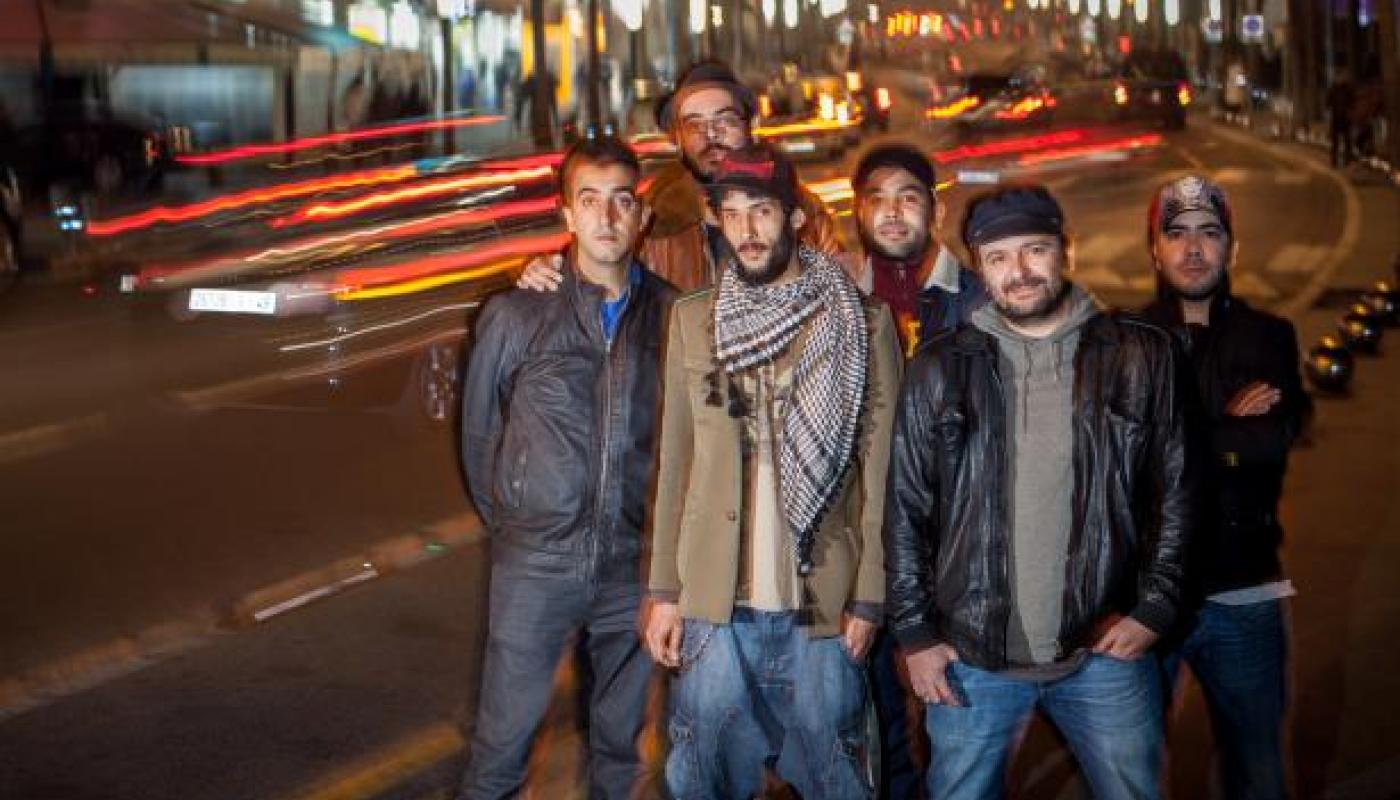 This “sharp, vibrant, and very nearly universal” band (Washington Post) is counted among the 50 people who shape the culture of the Arab world (Huffington Post, 2012).  Unfettered and irreverent, Hoba Hoba Spirit creates its drive from the bold clack of qarqaba (double castanets) and rhythmic swagger of North Africa. With high-energy delivery, heavy guitars, and droll plays on words, Hoba Hoba Spirit is Morroc’n Roll – a hook-laden, thought-provoking party.

A crowd-wowing multilingual band from Casablanca.

On tour as part of Center Stage

Unfettered and irreverent, Hoba Hoba Spirit began touring Morocco’s small towns in 1998 and burst onto Casablanca’s main stage in 2003.  For more than 10 years this Morocc’n Roll powerhouse has been one of the Arab world’s most visible bands and a cultural change maker at home and abroad.  Hoba Hoba Spirit creates its musical drive from the clack of qarqaba (double castanets) and the rhythmic swagger of North Africa.  The band calls its trademark mix of homegrown roots, Rock and Reggae “Hayha” music.  As front man Reda Allali puts it in the band’s anthem Gnawa Blues, this is not “world music…it’s just the music of my world.” As the Washington Post sees it, Hoba Hoba Spirit is "sharp, vibrant, and very nearly universal."

Under the auspices of Center Stage, Hoba Hoba Spirit calls the U.S. home for the month of September 2014 with engagements in Seattle, Washington, DC and Atlanta to New York, Austin and Iowa City.

“Hoba Hoba Spirit‘s influences go from the Clash to Manu Negra, from James Brown to Nass el Ghiwane, to Joe Strummer to Bruce Springsteen,” said Allali in a 2012 interview with Jeffrey Callen for MTV Iggy.  “Rock was not played in Morocco the way we played it -- with Arabic lyrics and Moroccan rhythms.  But the core of the system is the rock ‘n roll attitude which is to try for something impossible, to be at the edge of chaos, to make the illusion that everything is possible, to give the impression of places better than where you are now and this is important…. But, we don’t want to be too serious—it’s music, and let’s be ironic and have some fun. There are too many people giving very serious lessons. I don’t think the music scene is in need of one more moral teacher.”

Whether or not you speak Darija (Moroccan Arabic), French or English, Hoba Hoba Spirit music lays down a critical groove, but these lyrics fill in the picture…

Reda Allali  Leader of the band, guitar player and singer, Réda is the Hoba Hoba’s main songwriter. An essayist and journalist, he writes about society and football (soccer), and pens an (ir)regular column for Telquel under the nom de guerre Boualem Zakaria.

Saad Bouidi  Bass player, groove’s keeper, Saad is an essential musician, who is fond of rock culture and Moroccan music.

Anouar Zehouani  Guitar player and co founder of the band, Anouar's personality and huge musical culture are important in the process of writing music.

Hamza Chioua Sound engineer and all round musical fixer of Hoba’s concerts over long years. He is also involved in the recording of the band’s music.

Casablanca’s unfettered and irreverent Hoba Hoba Spirit finds the rock drive within the bold clack of qarqaba (double castanets) and rhythmic swagger of North Africa. They belt choruses as a band, invoking both the soccer-stadium democracy found in their homeland and the robust call-and-response of Gnawan song. They shout truth to power at home, and poke fun at the global cultural cognoscenti who decide who and what is called ‘world music’ with post-punk wit, high-energy delivery, and droll plays on words.

Bursting onto the scene more than a decade ago, the group won a huge fan base in their homeland by doing what rock once did on a regular basis: asking tough questions, challenging the status quo, and having a good time doing it. “We wanted people to be happy with who they are,” explains lead singer and philosophical Hoba Hoba frontman Reda Allali. “[Moroccan popular] chaabi music is full of this chaotic joy. We want this spirit, this private party filled with love and sweat and what you have in your heart, this African heart of Morocco, back on stage.”

Hoba Hoba Spirit will bring this powerhouse mix to American audiences in 2014 under the auspices of Center Stage. Center Stage is an exchange program of the U.S. Department of State’s Bureau of Educational and Cultural Affairs. Exchange programs initiated by the Bureau support U.S. foreign policy goals and engage youth, students, educators, artists, athletes, and rising leaders in the U.S. and more than 160 countries. Center Stage uses the performing arts to support cultural understanding between American and international communities; participating artists experience the U.S. first hand and cultivate lasting relationships.

A band of professionals—journalists, engineers, intellectuals by day; rock stars by night—Hoba Hoba Spirit plays with languages and sounds and puns across tongues. Songs like “Blad Schizo,” which coined phrases that entered popular slang, or “Dark Bendir Army,” which seamlessly melds a modal electric guitar line and pounding beat with raw-edged, soaring North African vocals and Arabic lyrics, show the band’s versatility and clever songwriting, their ability to craft riffs that barely give on where the Motorhead ends and the Moroccan party begins.

There’s great joy to be had at that party, and it’s connected to the texture and nuance of local culture. The way New Jersey inspired Springsteen, the Afropolitan, post-colonial culture of Casablanca sparked Hoba Hoba’s musical perspective. “Casablanca is a world apart, a chaotic world with big energy,” exclaims Allali. “It’s a social and cultural mixture that’s not the easiest thing to find in Morocco. It offers you freedom due to its size. People can live the way they want to live.”

The band grew up in this relative freedom, neighbors and friends who began to jam together as rock and metal-loving youngsters. Sons of Casablanca, they began to craft songs that were syncretic by default. The interwoven sounds of Morocco’s many traditions and complex history were the sounds they heard every day. Along with the Gnawa, Berber, and Arab sounds, and more mainstream rock idols like Springsteen and the Clash, Hoba Hoba Spirit embraces the onstage energy and multicultural wanderings of high-intensity bands like Gogol Bordello or artists like Manu Chao.

“We don’t have categories or boxes in our minds that, say, this riff is surf, this beat is Berber,” Allali notes. “You can listen to rock and reggae all day, then go to a traditional wedding for hours. You don’t analyze where things are coming from.”

While Hoba Hoba may not think in musical categories, they do think a lot about where they are from and what it means to be from Casablanca, the Maghreb, and the Arabic speaking world of Africa. “Our songs have a lot of very specific reference to what’s going around us, though this can feel very universal, just like Springsteen proved,” muses Allali. “There’s a lack of confidence, a lot of concern about the image that the rest of the world gets of us here in Morocco. We feel that we’re from here and here we are and what’s the problem? The attitude in our music is based on love for the pop culture of this neighborhood, this place.”

Hoba Hoba sees the pop culture of place in Morocco’s unsung nooks and corners, spaces outside the often stiff, stifling atmosphere of limited public expression and state-run media. One of these corners is the soccer stadium, a place where the band, avid soccer fans, has found a haven of democracy and popular sentiment. “When we were young, all public speech was censored, controlled. The people we heard had polite, cold speech. Then you had the stadium, where 20,000 people sing what they have on their minds, an island of freedom where everything could be said and sung. For me it’s great to see how a crowd can create a song, and very often when we write a chorus, we imagine a crowd singing it.”

That catchiness and the hot-button issues that rile and move their fellow Moroccans translate directly into songs and into their stage show. “All the musicians in the band are singers and they use their voices on stage. It gives you huge energy. It’s one of the key parts of our music. We all join the chorus, and we know how to make you stand up and grab the mic … In this moment, when you abandon yourself and your body, it just resonates.” The result: one hook-laden, thought-provoking party.

Hoba Hoba Spirit
On tour as part of Center Stage

The following credit is required on the title page in all printer performance programs. We appreciate its use wherever else it's practical: brochures, posters, ensemble-only promotional materials, press releases, advertisements, etc:

Download a zipped folder of color and black and white version of the logo here.