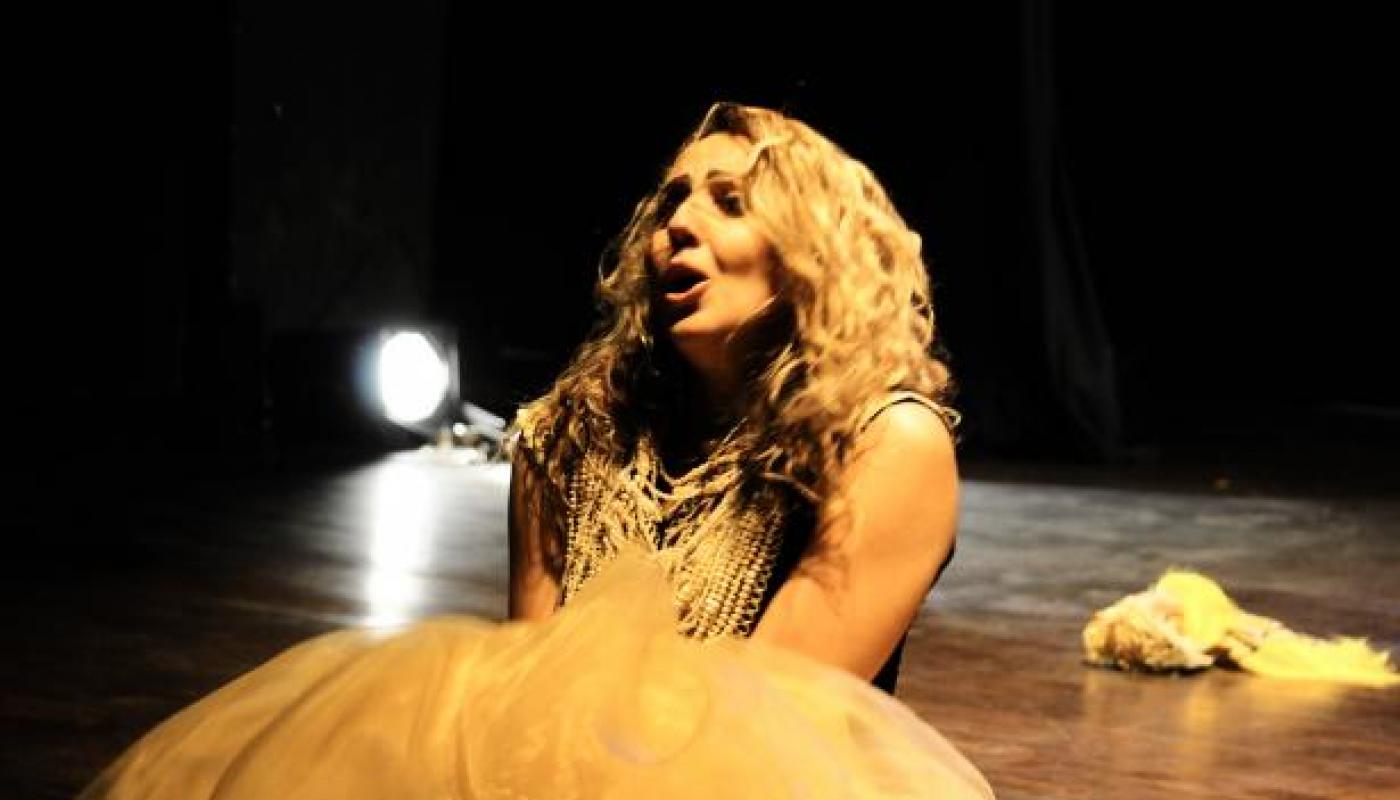 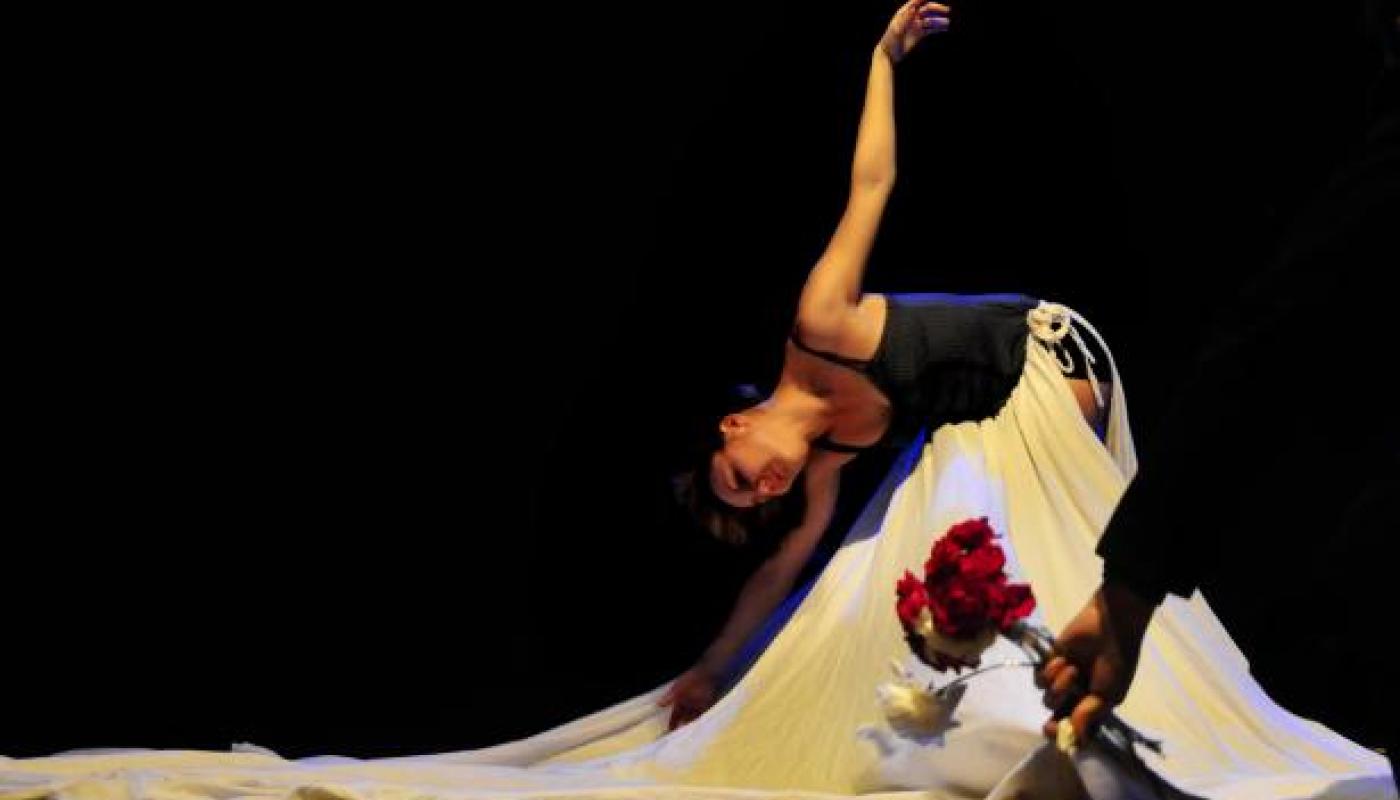 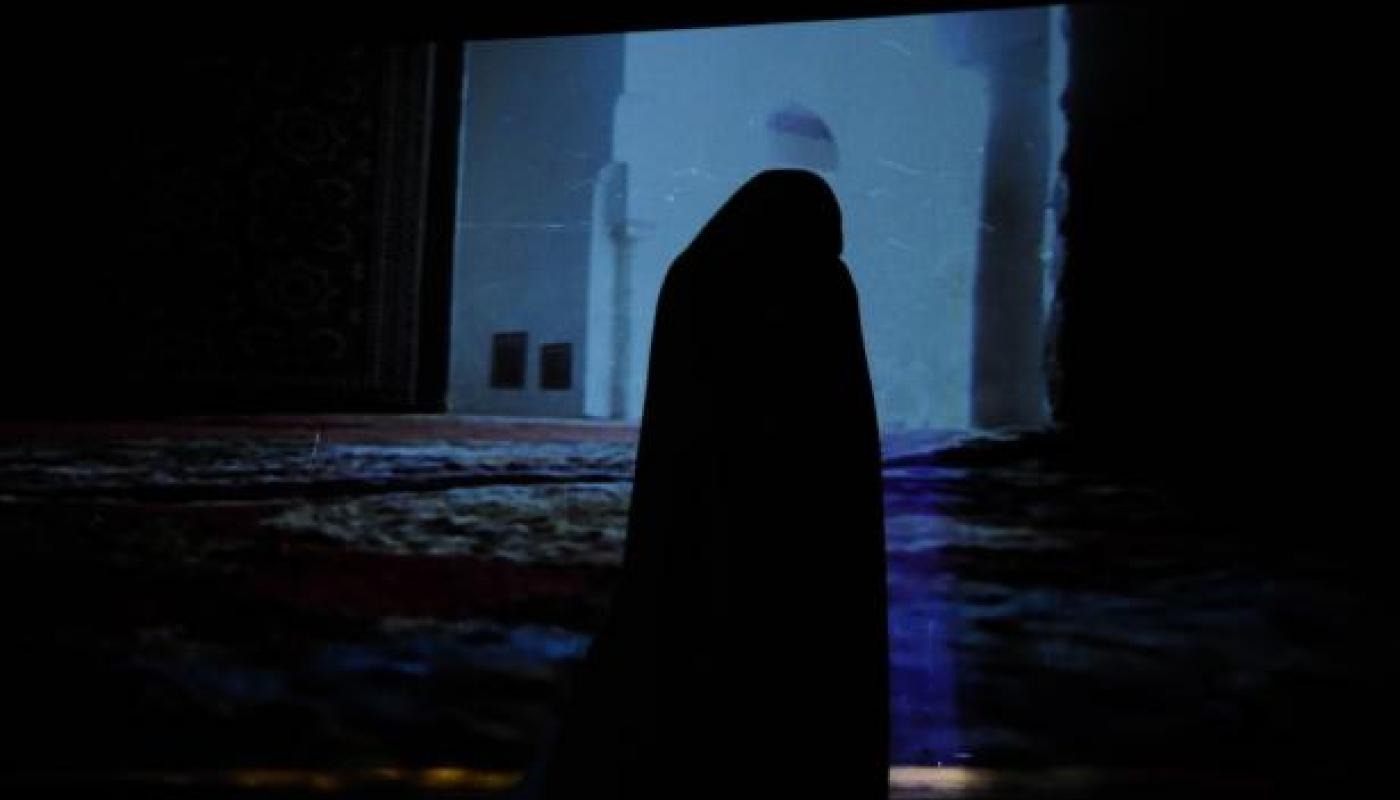 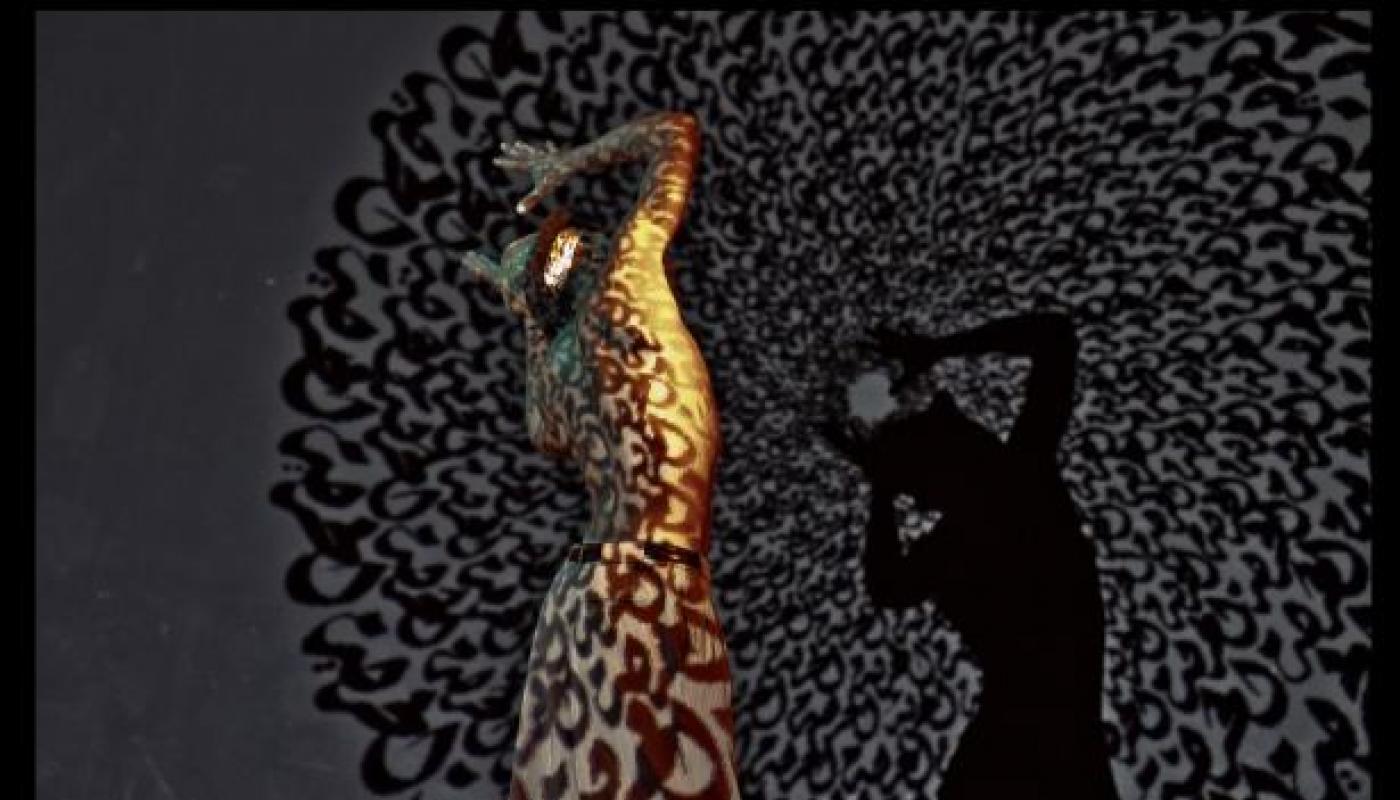 Riveting solo movement by choreographer-dancer Hind Benali accompanied by a live-recorded sound score traces the complexities of Morocco in IDENTITY, a new work made for Center Stage.  In this evening-length piece, Benali explores her personal past and African roots, the limits and freedoms of Morocco’s history and current practices, the multivalent layers of culture and religion, and the lives of her elders.

The multi-talented Hind Benali is at the forefront of the contemporary dance scene in Morocco.

MOROCCO: GLOBALIZATION AND ITS CONSEQUENCES

Lahore, Casablanca, and Agadir, Ho Chi Minh City, Peshawar, and Hanoi. Each has served as a global and cultural hub for centuries. As sons and daughters of these ancient crossroads, performers in seven contemporary ensembles are making independent month-long tours of the USA in 2014 as part of Center Stage, a cultural diplomacy initiative now in its second season. Through music, visual imagery, and movement, these artists combine the new and the historic in an ongoing dialogue that shapes the rich and complex societies in which they live.  In this spirit, Center Stage invited Moroccan dance maker Hind Benali to create and present the premiere ofIdentity/Identité,a new full-length work.

in collaboration with Compagnie Posue

Choreographed and Danced by Hind Benali and Soufiane Karim

Identity/Identité includes and recontextualizes excerpts from Her Other Side, a work co-choreographed and performed by Hind Benali and American choreographer Esther Baker.

The first creative residency for Identity/Identité was hosted at York University in Toronto, Canada in 2013, at the invitation of, and with critical feedback from, Iranian-Canadian dance maker Sashar Zarif.

Identity/Identité has been made possible, in part, with support in the USA from Center Stage, and in Marrakech, Morocco from Institut Français, Conservatoire de Musique et de Danse, Théâtre Dar Takafa, and Tempo Danse.

On tour in the USA for the month of October, Fleur d’Orange is hosted by Dance Place and The Kennedy Center (Washington, DC), Kelly-Strayhorn Theater (Pittsburgh), Wesleyan University (Middletown, CT), Monkeyhouse Dance (Somerville, MA) and in New York City by Baryshnikov Arts Center in partnership with Gibney Dance and Spaceworks.

Choreographer and dancer Hind Benali is a native of Oujda on Morocco’s Algerian border.  Like many Moroccans, her hometown roots are strong; Benali is now creating cultural programs for professionals and students there, though the majority of her activities take place in Marrakech and Casablanca.  As platforms for her work and collaborations, she founded Association Fleur d’Orange in 2006.  In 2008, she produced the first ACTION DANSE, a festival and workshop intended to contribute to the development of dance in Morocco and to foster collaborations between artists across borders. She also teaches and provides a creative home for many of Morocco’s contemporary, beat, and hip-hop dancers and musicians.

“I made a decision,” states Benali. “I had to dance and that meant I had to fight.” This determination, coming from within a culture where women do not dance publicly, took her south to sub-Saharan Africa, rather than the more typical path to France and Europe, for inspiration on how to become a contemporary dancer. Using her African experiences as a springboard, she has taken modern dance to public spaces in Morocco—historic sites, city parks, and theaters – and abroad.

Whether in solos for herself or in works created with others including non-dance members of the community, Benali takes life’s everyday texture and transforms it. She chases the inaccessible – a creative space that both honors and challenges society’s paradigms.

Soufiane Karim is a native Moroccan who started dancing at an early age, and turned to Hip Hop in his teens. He is a cultural and artistic traveler and student; his creative and spiritual journeys and collaborations took him to France for 5 years and then to New Caledonia, where he established the Posuë Dance School-Company. From that Pacific island nation, he researched and collaborated with artists from neighboring Vanuatu, Fiji, New Zealand, Australia, Malaysia, and Indonesia. Recently, Karim has turned his attentions back to Morocco and created ‘Kaly-Graffyk‘ – an exploration of and dialogue between the tactile representations of Arabic calligraphy and the kinetic movement of the body.

Mochine Imrharn is a multi-instrumentalist, composer, sound designer and frequent collaborator to Hind Benali. His soundscape for Identity/Identité, mixed live and responsive to the performance, includes original, found, manipulated, and looped sounds. Musical instruments include the mandolin and qarqaba, the double castanets that are a primary rhythmic component of Gnawa music of Algeria and Morocco

“I made a decision,” states choreographer and dancer Hind Benali, founder of Fleur d’Orange, a contemporary dance company in Casablanca. “I had to dance and that meant I had to fight.”

This determination, coming from within a culture where women do not dance publicly, took her south to sub-Saharan Africa, rather than the more typical path  to France and Europe, for inspiration on how to become a contemporary dancer. Using her African experiences as a springboard, she has taken modern dance to public spaces in Morocco—historic sites, city parks, and theaters -- has founded and produces an international dance festival (one of the very few in her homeland), and teaches and provides a creative home for many of Morocco’s contemporary, beat and hip-hop dancers and musicians.

Whether in solos for herself or in works created with others including non-dance members of the community, Benali takes life’s everyday texture and transforms it.  With powerful, intensely charged movement and saturated imagery she chases the inaccessible – a creative space that both honors and challenges society’s paradigms.

For her performances in the U.S. in 2014 as part of Center StageSM, Benali will present IDENTITY/IDENTITÉ, a new evening-length piece of solos and duets.  An intimate exchange between artists and audiences, it is dedicated to Benali’s exploration of the circumstances and desires of her life as a woman, a Muslim, an Arab, and a North African. On stage, her beloved roots coexist with cultural ambivalence, the double-edged sword of invisibility, connection to the past, and religious devotion.

IDENTITY/IDENTITÉ is created and performed in collaboration with Franco-Moroccan hip hop dancer, Soufiane Karim.  The piece’s soundscape is composed of live and recorded music by multi-instrumentalist Mohcine Imrharn, interwoven with found sounds. Strikingly lyrical calligraphy by artist Yacine Fadhil will be projected on the stage and dancers. Additional video imagery by Benali documents shrines, stories of elderly Moroccans about their youth, and sounds of the traditional markets to conjure and share environments that have formed her life and those of her forbearers.

In exploring the nuances and details of Moroccan lives and transforming them into an intense solo movement piece, Benali hopes to express part of her own struggle to find the golden mean between global culture and local morés and forms. “We can be open to the world without forgetting what we really are,” Benali says.

“I was trained in ballet, but ballet was too technical and my body wasn’t right. I always knew I had to do something different.” Benali discovered the abstract, conceptual edges of contemporary dance in France. Though she savored the wild and unexpected opportunities contemporary dance afforded, she worried they’d never work back home. “I thought I’d have to give all this up, this life of dance, and wind up behind a desk. Or I’d end up going back to Europe to be a dancer.”

Instead, Benali found an unexpected, very different model for creating a new platform and new audience for contemporary dance. She went to her first African dance festival in Burkina Faso. Dancers there were talented, creative, and hardworking, but had little need for the formal training and European-style infrastructure and funding Benali and many artists around her assumed were required to jumpstart the dance scene back home. The dancers she met and collaborated with in sub-Saharan Africa had a wonderful freedom -- the freedom to create, and to use their roots and limited formal training to express themselves without apology or overreaching critique.

“It was a revolution in the way I watched dance. I started asking myself questions about dancers’ training. I was very academic, old school. But the African dancers around me had a traditional dance background and that was enough to prepare them physically, at least, for a professional dance career,” explains Benali. “I wanted to take that approach to Morocco, stop complaining about our lack of money, about our hard mentality.”

As an independent artist without a company of dancers, Benali has focused on collaborations -- primarily on solo and duo pieces, making work with dancers from South Africa and America, as well as Burkina Faso. Drawing on her own life, she tackles the rigid limitations of gender and the images of femininity, struggling with being a practicing Muslim and an open-minded artist who uses her body to express her ideas. Her Other Side, a collaborative piece with American dancer and choreographer Esther Baker Taparga, dismantles these clichés, revealing in part the other side of the veil. (A section of Her Other Side is adapted and performed by Benali in IDENTITY/IDENTITÉ.)  Iranian born dance maker Zashar Zarif, now based in Toronto, hosted and guided the 2013 workshop where Benali framed the first two sections of IDENTITY/IDENTITÉ.

To unravel and reframe these cultural and religious elements, Benali is engaging in lengthy, highly detailed research to document the warp and weft of the lives and culture around her—moments she will then turn into her signature intense, image-rich movement.

“I’m recording people singing lullabies and talking to some older people about their love experience, to hear the way they talk about it. I’ve recorded not only the sound, but their gestures and expressions, the stars in their eyes. I’m planning to wear traditional clothes as I work, and I may not use them on stage, but I will use the quality of movement they can give me,” Benali says. “…these…will be the starting point.” It’s a starting point that promises to lend Benali’s work a profoundly human quality, beyond culture-specific struggles of identity.

Center Stage will bring seven ensembles from Morocco, Pakistan and Vietnam to the U.S. for month-long tours from June-December 2014, connecting artists with diverse communities across the country. Residencies will include performances, workshops, discussions, people-to-people exchanges, and community gatherings. Keep up with Center Stage on Facebook (https://www.facebook.com/CenterStagePage) and on Twitter (@centerstageus) and at www.centerstageUS.org

The following credit is required on the title page in all printer performance programs. We appreciate its use wherever else it's practical: brochures, posters, ensemble-only promotional materials, press releases, advertisements, etc:

Download a zipped folder of color and black and white version of the logo here.