Sarah Long Holland, an opera artist and accomplished recitalist from the United States conducted a workshop on opera at the National Academy of Performing Arts (NAPA). Entertainment, that too with educational elements, made for a pleasant event which gave all present a chance to browse through the history, basics, and aesthetics of classic and contemporary opera.

A Development Manager at the New England Foundation for the Arts (NEFA), Sarah also renders her services to the in International Centre for AIDS Care & Treatment Program (ICAP) at the Mailman School of Public Health at Columbia University New York.Her affiliation with Center Stage, an initiative of the US Department of State Bureau of Educational and Cultural Affairs brings her to Pakistan.

Sarah, who originally hails from Bethesda, Maryland, is an accomplished graduate of Stanford University, the Manhattan School of Music and Boston University’s Opera Institute. Having an international artiste of her stature was definitely one of those rare moments that we all cherish and everybody looked forward to a great evening ahead.

“The genre is still living and growing today” said Arshad Mehmood, an accomplished musician, actor, and the Director Programs (NAPA). “An accomplished tool to make voice sound profound, opera today is a fast catching a fever and even in China it has now carved a niche despite the fact that it is not a part of their culture. I strongly believe that being aware of the aesthetics of opera may also help artistes learn ways of voice modulation to have better voice throw, range and clarity.”

In her cheerful speech before the performance, Sarah highlighted the aesthetics of basic opera structure defining arias, prelude, Soprano and Tenor, Mezzo Soprano and Baritone, Bass, etc. Without any amplification devices in opera, every note is played and sung live, and that certainly makes it sound special. Unlike musical theatre, Opera also employs “recitative”; a style of scripting dialogue on explicit pitches that the whole set feels more thorough and cohesive.

Sarah, without any instrumental accompaniment, jumpstarted the show with an aria, ‘Tosca’ by Giacomo Puccini, from Italian opera. Referring to its brief history she said that it was first premiered in 1900, at a time of unrest in Rome. Despite receiving awful comments from musical giants like Joseph Kerman who called it a “shabby little shocker”, and other critics for whom it was nothing more than melodrama with confusions of plot, the fascination with ‘Tosco’ continued unabated, and till today its is one of the most frequently performed operas globally.

Sarah’s breathtaking performance, powerful vocal range, and effortless yet fascinating voice throw mesmerized everybody on an aural level, and felt absolutely phenomenal; only a stone heart could not be moved by her singing.

Receiving huge applause for her first piece, she moved on to a piece of American opera ‘Ain’t It A Pretty Night’ by Carlisle Floyd, referring the same to be one of the most frequently played operas in the US that was first premiered in 1950s and is based on the story of Sussanah and the Elders in the Bible. With recorded piano accompaniment, Sarah held her audience captive, yet again displaying a phenomenal vocal acrobatics, pure and rich voice, and evocative and moving interpretation skills.

The best part about the evening was the post-performance question and answer session that made the whole event a feast for all. Sarah carefully handled queries and impressed everybody with her down to earth demeanor.

While replying to a query, Sarah stressed that for anybody who intends to become an opera singer it is important to start from an early age simply because an amateur voice is easy to mould. Besides, since most of the opera work originates from Italy, acquaintance with opera history and literature and knowledge of the languages is indispensable. 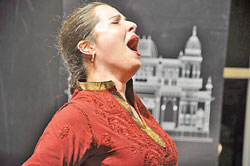