The New York Times: A Hawaii Home for Islamic Art Widens Its Scope

The New York Times: A Hawaii Home for Islamic Art Widens Its Scope

At the Shangri La museum in Honolulu, curators are redefining their vision of the genre and reaching out to new visitors (and visiting artists). 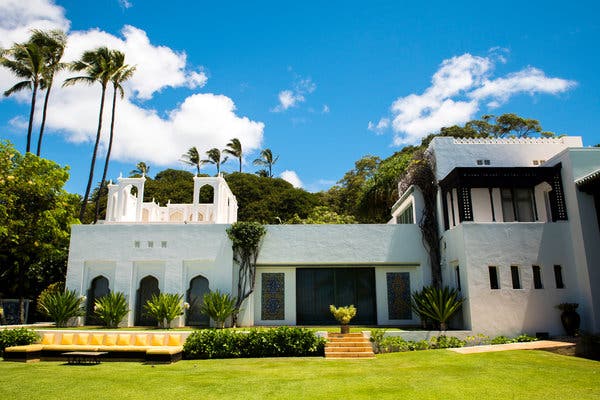 HONOLULU — Laura Berry, a Lithuanian bartender living in Hawaii, was on a mission. Standing in a room that held a 13th-century ceramic mihrab, or prayer niche, from Iran, she was counting how many human figures were on the Persian lusterware tiles that lined the doorway.

The answer: two. It was all part of a recent “Scavenger Hunt: Figures in Islamic Art” event at the Shangri La Museum of Islamic Art, Culture & Design in Honolulu.

For Ms. Berry, it was a chance to show a visiting cousin “a little more culture rather than just palm trees and beaches.” For the museum’s curators, it was a chance to expand the definition of Islamic art far beyond the confines of geometric patterns.

Shangri La, with its sweeping views of the Pacific Ocean and Diamond Head, was built in 1937 as a home for the billionaire American tobacco heiress Doris Duke. She died in 1993 at age 80 and had stipulated in her will that the property be made “available to scholars, students and others interested in the furtherance and preservation of Islamic art.” The home and its lush grounds became a museum in 2002, displaying much of what she collected from her travels around the world.

Now, the museum’s most recent crop of curators is trying to reach a wider, possibly hipper crowd through new types of events (like the scavenger hunt) and by hosting artists charged with exploring Muslim and Hawaiian cultures in new ways.

In earlier years, some of the residencies featured traditional art forms like miniatures and calligraphy, but more recent participants have included the roots-soul musicians The Reminders, the comedian Hari Kondabolu, the podcast hosts Taz Ahmed and Zahra Noorbakhsh, the hip-hop dancer Amirah Sackett, and artists, like Hayv Kahraman, who embrace feminist themes.

On site this month is the Papermoon Puppet Theater, a group from Indonesia that puts a contemporary spin on traditional shadow puppetry. Next month, the museum will host the performance artist Anida Yoeu Ali and the filmmaker Masahiro Sugano, who run a media lab known as Studio Revolt.

Konrad Ng, the museum’s executive director since 2016, said he was “hired to activate the place in new ways.” The idea, he said, “is to be broader in our reach to the public and to experiment, to really think of the museum as a garage of innovation for ideas.”

His idea for a residency, Mr. Ng said, “is to have an artist or a cultural thinker, dwell in our mission and in our collection, understand its potential and interpret it for us. In a lot of ways, be a moral compass for where this museum ought to be going.”

From his base in Hawaii, a state that challenged President Trump’s so-called Muslim ban in the courts, Mr. Ng seems prepared to push back against rising xenophobia.

“I think that museums have a special role to play in democracy,” Mr. Ng said. “We’re sometimes seen as a trusted resource for the public and in that way, we’re a firewall, as it were, in civic discourse for understanding perspectives that might be hard to understand, or complex.”

He and his team ask visiting artists to engage with the surroundings at Shangri La and throughout Honolulu, and to connect with Hawaiian culture and local artists.

That inspired Ms. Kahraman during her two-week stay in March. Born in Iraq and now based in Los Angeles, she created two drawings and a painting in a work called “To the Land of the Waqwaq” in an exploration of identity, culture, migration and sexuality. The pieces, now part of the museum’s permanent collection, may surprise those expecting something traditional or even religious.

“There were so many things I could pull from,” Ms. Kahraman said, “but what really stood out to me was the environment, the landscape. So instead of a particular object, I started researching about Hawaiian mythology and the Koko Crater.”

She learned, she said, about the legend of “the goddess Kapo who had a detachable vagina, which she threw to distract a pig god who was about to rape her sister.”

“The place it landed became Koko Crater, which is not far from Shangri La,” she said. “I found that very interesting because my work deals a lot with sexuality and femininity and ways to subvert the male gaze.”

She also felt a sense of healing while in Hawaii, she said. “I started thinking about when I fled Baghdad after the first gulf war in the early ’90s,” she said. “It took about a month and we would always ask my mom where we were going. She would say, ‘We’re going to the land of the Waqwaq,’ which is colloquial Arabic for a sort of faraway, utopian, magical land. A sort of Shangri La.”

One of the ancient Waqwaq stories, Ms. Kahraman said, is about a tree that bears fruit in the form of nude women hanging by their long hair. “If you cut the hair, she will fall to the ground and will live for 24 hours, during which you were able to have intercourse with her. So the idea was to completely subvert that," she said, “and use the image of the woman actually cutting her own hair.”

Living in Iraq, “culturally speaking, we were surrounded by an Islamic culture,” Ms. Kahraman said. “But I would not identify myself as a Muslim. I’m part of that diaspora and including the voice of the diaspora is very important as well.”

Asad Ali Jafri, the curator of programs at Shangri La, is among those working to dismantle what he calls misperceptions about Muslim communities.

Speaking from London, after presenting a “Listening While Muslim” event at a Christian music festival in central England, he said that the artists invited to Shangri La had to “help contextualize the collection at the museum.” That can prove a challenge, he said, “because of where we’re located, sometimes because Islamic art is so varied all across the globe, sometimes because of the way these various identities are perceived already. I think the easiest way for us to do this is to let artists speak for themselves, to make sure that the voices heard are as diverse as possible.”

That, he said, is “the only way we can get away from a monolithic idea of what Islamic art may be, of what some practitioners of those arts may be.” Shangri La is not alone in rewriting the definition.

“It covers lands where the dominant religion was Islam,” she said, “but as the field progresses, we start to look more into the minority cultures as well: We have to take into consideration that there were Christian and Jewish artists who were working under Islamic rule.” Many scholars are rethinking its use today, she said.

At Shangri La, the curators are “always revisiting and visiting our definition,” Mr. Ng, the director, said. “Faith is one dimension of identity. If you looked through the archives of artists and scholars that have been at Shangri La, there’s a pretty decent spectrum and variety of voices. And that will continue.”

Does that require Doris Duke’s own influence to fade at Shangri La?

“Some people come wanting to know more about Doris,” Mr. Ng said, “and I often say that in her will she didn’t ask us to keep Shangri La arranged in a way that showcased how she lived her life. Rather, she wanted us to show how Shangri La represented the cultures, the people, the art, that so inspired her.”

What would she make of the rappers and puppeteers?

Susanne Fowler was an editor in the London and Paris offices of The New York Times.

A version of this article appears in print on Oct. 27, 2019, Section F, Page 36 of the New York edition with the headline: Islamic Art’s Shangri La.