Dawn, On the road with Pakistani folk singer Sanam Marvi in America

Dawn, On the road with Pakistani folk singer Sanam Marvi in America

Sanam Marvi knows no such thing as stage fright; on stage she's as natural as having a cup of steaming chai. 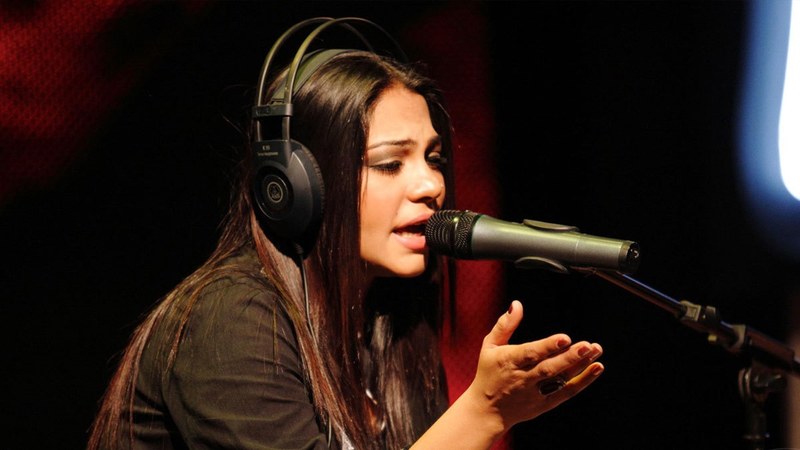 Throughout the performance, she quietly controls the other musicians through nods, a wave of her hand. Photo: Kohi Marri

“This is the longest I’ve been away from my children,” said Sanam Marvi while trying to FaceTime with her husband back home in Lahore.

I met her while she was on tour in the United States as a part of the programme called Center Stage. Pakistani singer Arieb Azhar is also travelling with her group as their ‘cultural interpreter’ although he performs with her on stage too.

“I haven’t been away from them for more than two-three days at a time at most,” she added. “My husband was telling me that my youngest son has been asking about me a lot.”

Sanam and her mobile phone are inseparable. When not taking selfies or photos in front of different places to post online — “I have 130,000 fans on Facebook!” she would often say with pride — she’s constantly communicating with family back home, checking in on her children or talking to them. Their welfare keeps her occupied when she’s not performing. Sanam getting ready for her performance at BAM Opera House.

We’re in Boston where she’s due to perform at the historic Sanders Theatre — as a part of their ‘celebrity series.’ She isn’t the first qawwal to perform there, the Sanders stage has also been graced by the likes of Nusrat Fateh Ali Khan and Abida Parveen. But the historic venue and the legacy it carries doesn’t bother her.

Put all of the singers on one side and Sanam on the other, none of them are a match for the sheer force with which she sings — even in a casual setting.

That’s because Sanam Marvi knows no such thing as stage fright. Throughout the time I met with her backstage, there was never even the slightest hint of nervousness or performance anxiety. Going on stage and performing for a crowd, no matter how numerous, is as natural to her as having a cup of steaming chai.

After Arieb introduces the audience to the work of South Asian Sufi poets and invites the band to perform, Sanam quietly takes her place in the front and center of her ensemble. She appears demure and somewhat serious as she starts her concert.

Throughout the performance, she quietly controls the other musicians through nods, a wave of her hand, and if they have played exceptionally well, she will reward them with an appreciative smile. On the outside she appears almost docile, but make no mistake, she controls how her show will go 100 per cent. Her performances are promoted prior to her arrival and usually have a certain number of South Asians present. As is customary for audiences attending a qawwali, they would often clap (sometimes on a command issued by Queen Marvi herself) and sing along. During her performance at the Rackham Theatre in Ann Arbor, some even attempted to dance — or rather, force others to. Since most of the venues appeared quite formal, this seemed to often catch the non-South Asians in the audience by surprise.

Backstage, after the performance is over, Sanam comes across as a completely different person than how she is on stage. She loves taking funny photos and her ensemble often joins in. Who knew this celebrated qawwali singer was such a hoot? Her mischief doesn’t end at photos, sometimes with her brother, she’ll have imaginary duels while walking down the pavement. It’s very endearing. Post performance shenanigans in the dressing room at the BAM Opera House.

Everyone’s secretly a singer in her group. They’ll often be humming a tune or singing out loud while walking down the street, waiting for luggage, going up the elevator — pretty much any time.

“How long till we go back home?” asked Sanam’s brother when I met them again in New York. They’re due to perform at the BAM Opera House in Brooklyn. “It’s not that we don’t like it here, but we miss our children very much. Also, it’s very cold.” I meet Sanam and I notice she’s finally wearing a jacket albeit, perhaps not the right one — it’s a leather jacket that looks nice, but isn’t enough to keep warm. That’s something she noticed as well.

“I don’t like wearing this,” she said referring to ‘western’ clothes. “I don’t feel like they’re graceful enough,” she added, “but they (the organisers) kept telling me to keep warm and wear a jacket, so I bought one, but it doesn’t seem to be working. Why is that? It’s supposed to be a good brand.” I can understand where she’s coming from — as people from the south side of the country, the province of Sindh, we don’t know how to ‘winter.’ I explained it had less to do with the brand and more to do with the type of jacket she was wearing.

Back at the hotel, her ensemble is still standing outside, but with a few other South Asian looking people. How were they finding New York? “We went out for a walk around the block but returned to the hotel very quickly,” responded her brother, “Just in case. We didn’t want to get lost.” This time while she is backstage at the Opera House, from behind the curtain, Sanam mimics Arieb as he delivers his introduction to the audience. It’s a speech she and her band have heard many times by now and they know it by heart. It’s hard not to laugh out loud. Soon, it’s time for her to go on stage and she drowns the audience with her powerhouse vocals. Mid-way through the performance, an audience member yells “Sanam Marvi you rock!” Indeed.

Backstage, Sanam comes across as a completely different person than she is on stage. She loves taking funny photos and her ensemble often joins in. Who knew this celebrated qawwali singer was such a hoot?

A few weeks later, we’re sitting at an establishment in Washington DC, the night before our flight back home. We’re joined by the backing vocalists from Sounds of Kolachi — Nimra Rafiq and Iman Shahid— as well as Arieb Azhar and Shehryar Mufti from Bumbu Sauce. By the time I joined them, they were singing — albeit not together.

Nimra sang her favourite vintage Bollywood number, Iman sang a song from her performance in Grease (directed by Nida Butt), Arieb sang one of his more popular online hits and then it was Sanam’s turn. Put all of the singers on one side and Sanam on the other, none of them are a match for the sheer force with which she sings — even in a casual setting. The commotion attracted the attention of a couple of others who clapped in response. The only other time I’ve seen Sanam get truly emotional, other than when talking about her children, is when it was time to say goodbye. Her tour manager, Stacey Boggs, accompanied them all the way to the departure lounge before she and Sanam exchanged a tearful hug. Stacey had been a little emotional when she met Sanam before her last performance at the Kennedy Centre as well. “It’s been an honour,” Stacey had whispered to her before Sanam left to go on stage. For Sanam the tour ended on a bittersweet note: she was happy about going back home and meeting her family, and heartbroken at having to leave her new friends behind.