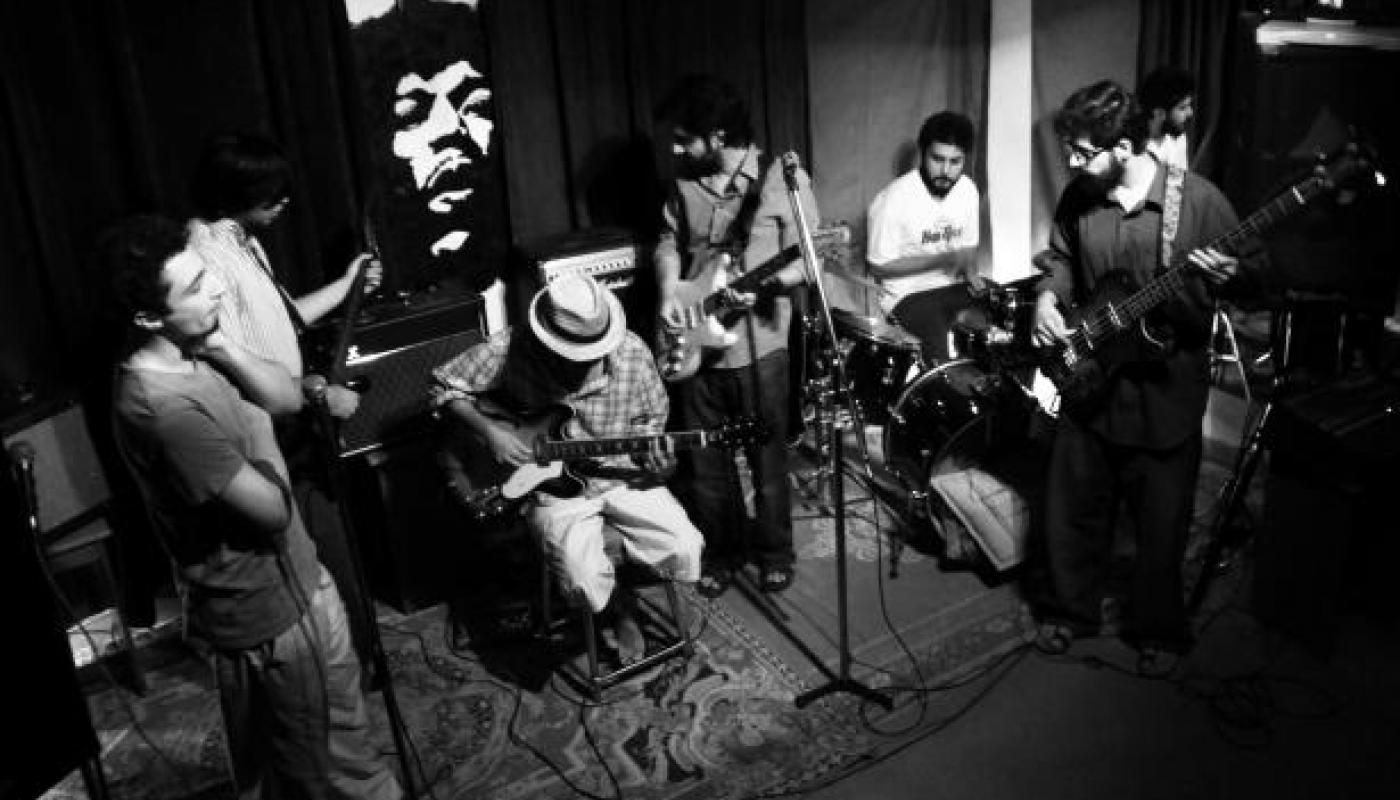 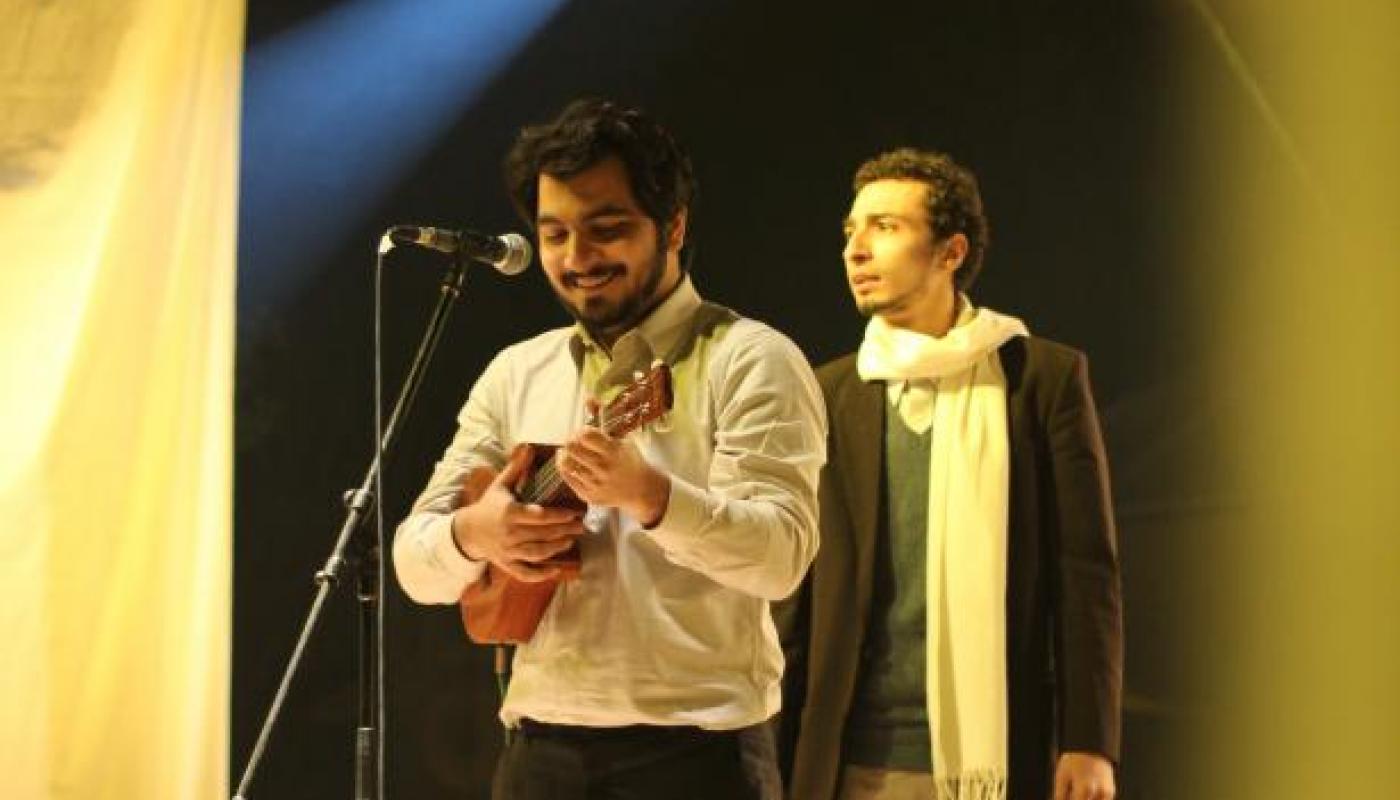 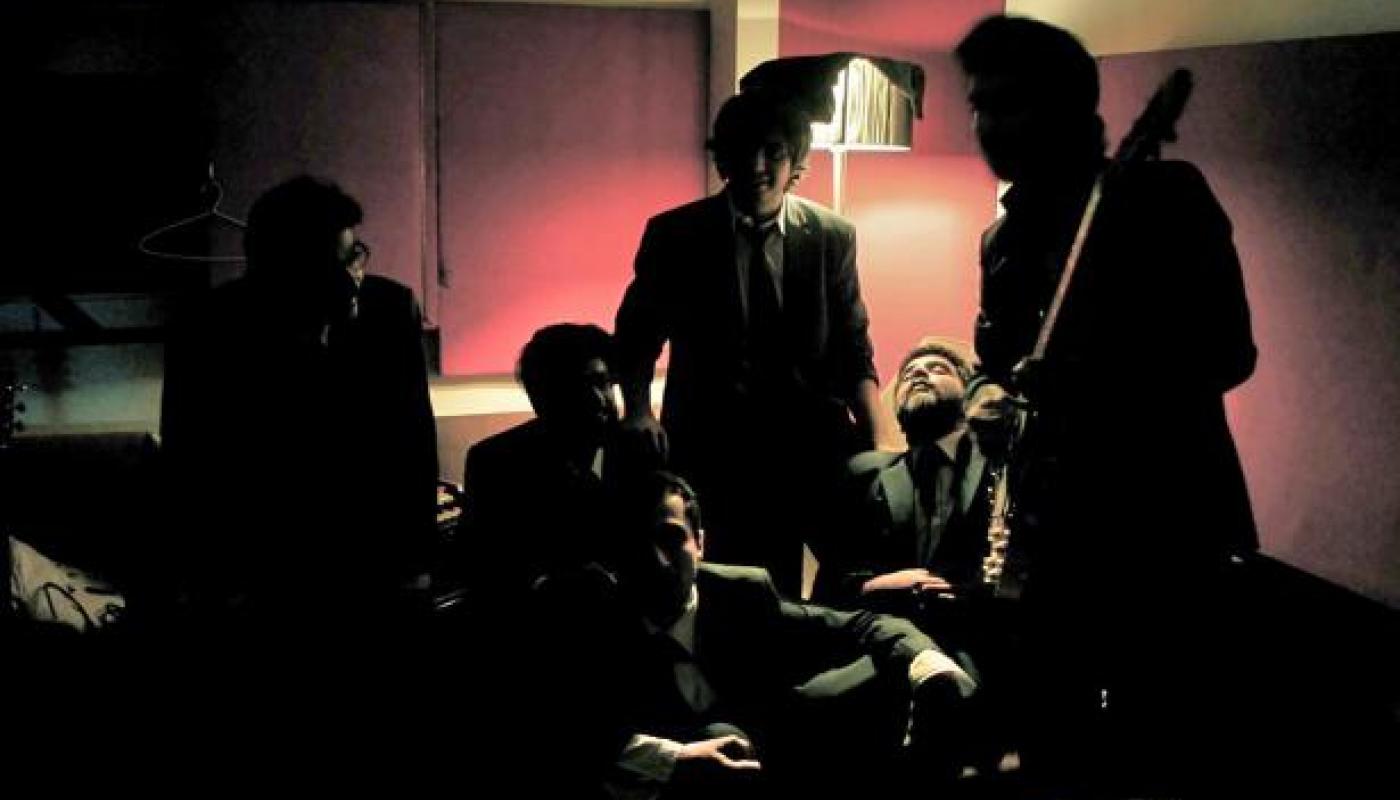 Poor Rich Boy, Pakistan’s underground indie-art rock phenomenon, conjures the strangeness of everyday life in a society where expressing one’s inner world can be both a cathartic and subtly rebellious act. Enigmatic and layered, the band’s striking vocals, atmospheric sounds, and the occasional kazoo create a crystalline sound that suggests, but rarely reveals.

Triumphant in its use of minimal vocal harmony. The production is earthy, and leaves plenty of room for the acoustic instruments to find their respective places. This is poetry, and it is presented in mixed media.

Lahore, Pakistan
On tour as part of Center Stage

The discreetly subversive Poor Rich Boy hails from Lahore, a centuries-old cultural nexus of South Asia.  At the vanguard of Pakistan’s underground indie-art rock phenomenon, Poor Rich Boy conjures the strangeness of everyday life in a society where expressing one’s inner world can be both a cathartic and subtly rebellious act. Enigmatic and layered, the band’s striking vocals, atmospheric sounds, and percussive edges create a crystalline sound that suggests but rarely reveals.

Making their U.S. debut here under the auspices of Center Stage, Poor Rich Boy travels from Washington, DC, to Rhode Island, North Carolina and New York from June 1-24 on a tour that will include appearances and collaborations with Plume Giant, The Mast, the Bob Kendall Band, and DakhaBrakha.

A short note about the band’s English language lyrics…. “While a lot of people wonder why we don’t sing in Urdu, since it’s the national language, we wonder why the national anthem is in Persian and not in Urdu. But anyhow, if you walk around anywhere in Lahore or Islamabad – which is where the band members are from – you’ll find that all the road signs, billboards, advertisements, shop signs and public messages are written in Urdu as well as English. And it’s the same for every major city. Some people read these signs in Urdu, some in English, and some in both. If art is thus an abstract manifestation of culture and culture that of society then we’re the English instructions on a road sign that has instructions written on it in both English and Urdu.” – from an interview with the Qatar Peninsula

Shehzad ‘Shezy’ Noor (singer/songwriter/keyboardist) was born with a passion for music of all sorts—and has managed to keep that passion alive over the years by performing in various musical/stage productions, and fronting Poor Rich Boy as the lead vocalist, In real life, he draws his thoughts on paper and teaches children to sing. He teaches music and drama to primary and middle year students at one of Beaconhouse’s Lahore campuses, and has future plans to build arts programs for underprivileged schools.

Zain Ahsan (rhythm and lead guitarist/producer) A man of subtle tastes, Zain is very particular about the sound of the band, holding tracks hostage for months while he burnishes their ferocious edges. A full time musician and self-proclaimed purist, he is a frequent guest speaker at workshops aimed at honing the talent of budding musicians.

Danish ‘Danny’ Khawaja (lead guitarist) is known for his incredible ear, uncanny musical structures and strident self-criticism. The reality is he can do just about anything.  Apart from Poor Rich Boy, Danny is currently producing an album of Sindhi folk songs. He dreams of making his mark on the international music scene before his twenty-second birthday.

Zain Moulvi a/k/a ‘Molly’(bass guitarist) has been a practicing lawyer, a sociology teacher, a debate coach, an independent researcher, as well as a seriously bizarre bassist (simultaneously) for many years now. Though he will pursue PhD studies at the University of Virginia this autumn, it is expected that he will ultimately find a way to be on two continents at the same time and keep playing his crazy bass.

Raavail ‘Buddy’ Sattar (drummer and percussionist) is a veteran of Lahore’s music world despite his young age.  Blessed with an innate penchant for all instruments percussive, he is a groovy exponent of the drums, the dumbak, the cajon, and on and on. A self-taught carpenter with a flair for all manner of design work and home repair, Raavail is also an upcoming producer and composer who intends to devote his creative energies to helping young musicians record their music.

Umer ‘Duck’ Khan (singer/songwriter) hails from the northern parts of Pakistan. He is a writer, poet, artist, songwriter, vocalist, but above all a true story teller and a philosopher of the comical and the sad. Best known for soulful compositions as the solo artist ‘Duck,’ Umer also puts his mellifluous voice into service as a lecturer of English Literature at one of Lahore’s leading universities.

Now in its second season, Center Stage introduces performing artists from abroad to American communities. Seven outstanding contemporary dance and music ensembles from Morocco, Pakistan, and Vietnam will perform, interact, and begin meaningful dialogues with Americans during independent month-long tours scheduled from June through November 2014. Artists touring as part of Center Stage help build mutual understanding via cultural expressions and people to people exchanges. From coast to coast, many performances and off-stage activities are free and open to the public.

Center Stage is a public diplomacy initiative of the U.S. Department of State's Bureau of Educational and Cultural Affairs. It is produced by the New England Foundation for the Arts in cooperation with the U.S. Regional Arts Organizations, and supported by the Robert Sterling Clark Foundation and the Asian Cultural Council. General management for Center Stage is provided by Lisa Booth Management, Inc.

Keep up with Center Stage and find additional information about Poor Rich Boy at www.CenterStageUS.org, on Facebook (www.facebook.com/CenterStagePage), and Twitter (@CenterStageUS)

“It’s the truth of the matter: We are poor rich boys. We are okay, well off, and are still sad,” explains Shehzad Noor Butt of Lahore, Pakistan’s experimental rock band Poor Rich Boy.

With a careful ear for this curious state of affairs, with discreetly subversive and mysterious tales, Poor Rich Boy digs into the interior life of the urban middle class in a city of sharp contrasts, and in a society where expressing one’s inner world can be both a cathartic and subtly rebellious act. “The band’s name is self-deprecating: We have three square meals a day and then talk about hurt feelings,” Butt continues.

Avoiding the slicker, more commercial sounds of Pakistani pop, attuned to the quasi-acoustic indie rock movement (think REM, Andrew Bird, or Arcade Fire), the musicians behind Poor Rich Boy conjure the strangeness of everyday life in their homeland. They will bring this sound to the U.S. for the first time as part of Center Stage.

Poor Rich Boy’s songs start from impromptu jam sessions, sometimes in the studio or on stage, sometimes on a late-night drive home with a ukulele (“Finger”). They hint at half-told narratives charged with emotional meaning and with a longing to give comfort in distress (“Alice”). They dream up everyday adventures of unusual characters, like a composite persona of former Pakistani Prime Ministers and spouses Benazir Bhutto and Asif Ali Zardari (“Zardarazir”). Enigmatic and layered, Poor Rich Boy uses guitars, ukuleles, atmospheric sounds, and the occasional percussion instrument to create a crystalline sound that suggests, but rarely reveals.

“It has largely to do with this inability to communicate, this almost isolated existence which is the middle class,” Butt notes. “Writing these lyrics in English, in a language we don’t speak all the time”—though well-educated Pakistanis are often fluent in English, the majority of Pakistanis speak only Urdu or other languages—“that has helped us come to terms with the fact that things are changing. It’s mirroring the outer world. It could be political, it could be personal. It’s a shift of paradigm.”

The musical paradigm has shifted as well. Though pop proliferates in places like Karachi and Lahore, it’s hard for less commercially oriented artists like Poor Rich Boy to find places to perform, especially as many venues have closed in the last five years. Yet there is an embarrassment of riches for open-eared musicians in Pakistan, and the band’s musical backgrounds speak to this.

Zain Ahsan, guitarist and producer of the band’s first studio recordings, picked up his older brother’s forgotten guitar as a kid and went on to play first in a blues cover band, then in other rock projects around Lahore. Butt grew up in a family that encouraged education in Eastern classical music, and as a young man he tried his hand at both sitar and tabla. He took to neither. Ahsan and Butt joined forces about six years ago, and eventually met up with the band’s other vocalist and songwriter Muhammad Umer Khan, bassist Syed Zainuddin Moulvi, drummer Ali Raavail Sattar, and guitarist Danish Bakhtiar Khawaja, all veterans of various Lahore rock bands.

Along with the usual love of rock, metal, and blues, the improvisatory structures powering the classical tradition of the northern subcontinent influence Poor Rich Boy’s songwriting. As have their years of listening to indie bands like Bon Iver, and experimental American composers like John Cage and Harry Partch, artists who inspired Ahsan to think more in soundscapes as the band laid down their tracks in his rough-and-ready home studio (the atmospheric “Old Money,” with its distinctive electric bow-treated guitar, breathy vocals, its creaks and knocks). “Every song works a little differently,” adds Ahsan, and first takes often morph into carefully honed tracks.

“A lot of our songs are birthed out of experiments, to learn more about the craft,” reflects Butt. “A lot of material comes from experiments that start with a word or a phrase. For ‘Fair Weather Friend,’ Umer was obsessed with the phrase ‘His Master’s Voice.’ The song unfolded from there.”

These tiny points of inspiration—the sound of English words, the turn of a certain phrase—evoke the slightly obscure, hard-to-pin microcosm of the individual, a creative approach with universal resonance. This move makes a clear understatement in a society where roles and relationships between people can be very rigidly defined. “We don’t want people to be able to tell that we’re from a particular race or culture,” says Butt. “We’re very happy that way.”

Poor Rich Boy
On tour as part of Center Stage

The following credit is required on the title page in all printed performance programs. We appreciate its use wherever else it's practical: brochures, posters, ensemble-only promotional materials, press releases, advertisements, etc:

Download a zipped folder of color and black and white versions of the logo here.