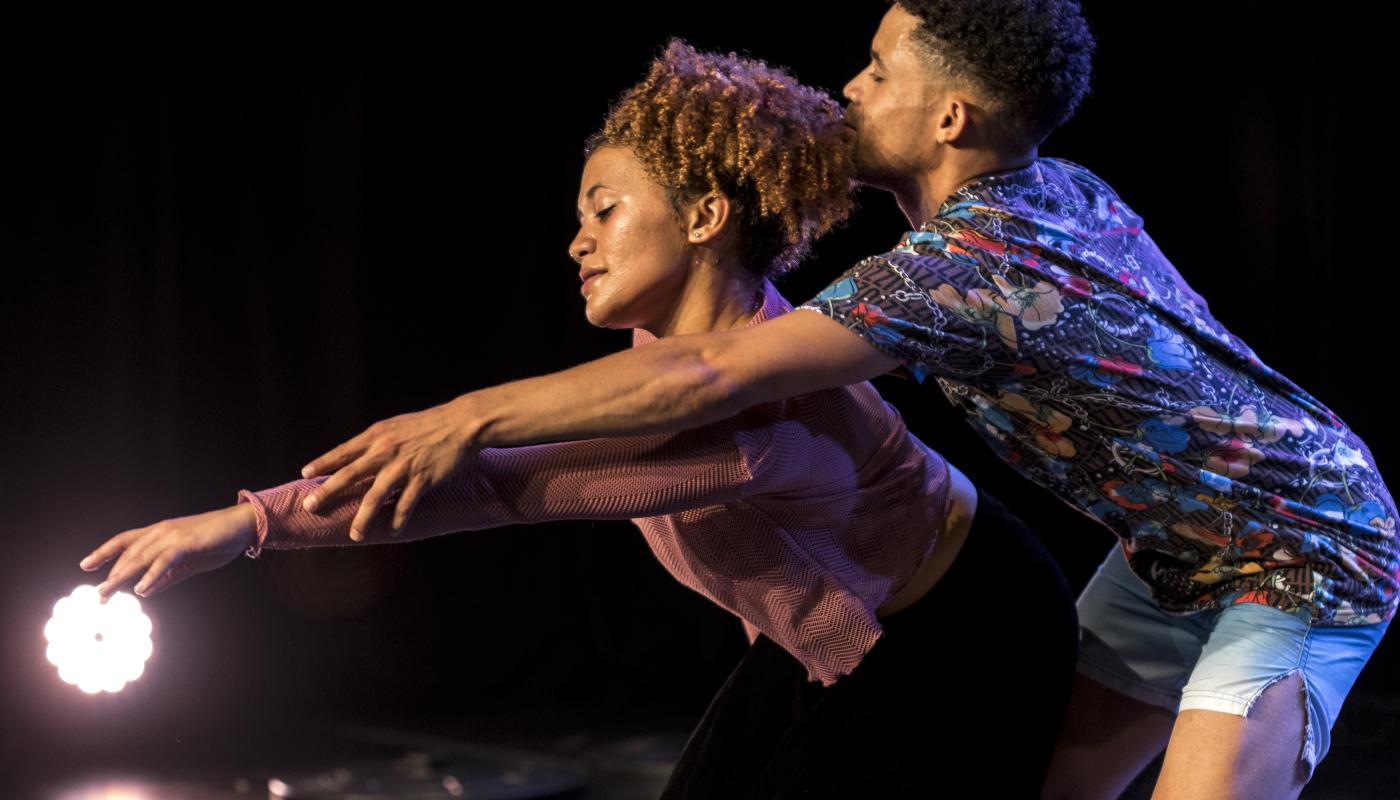 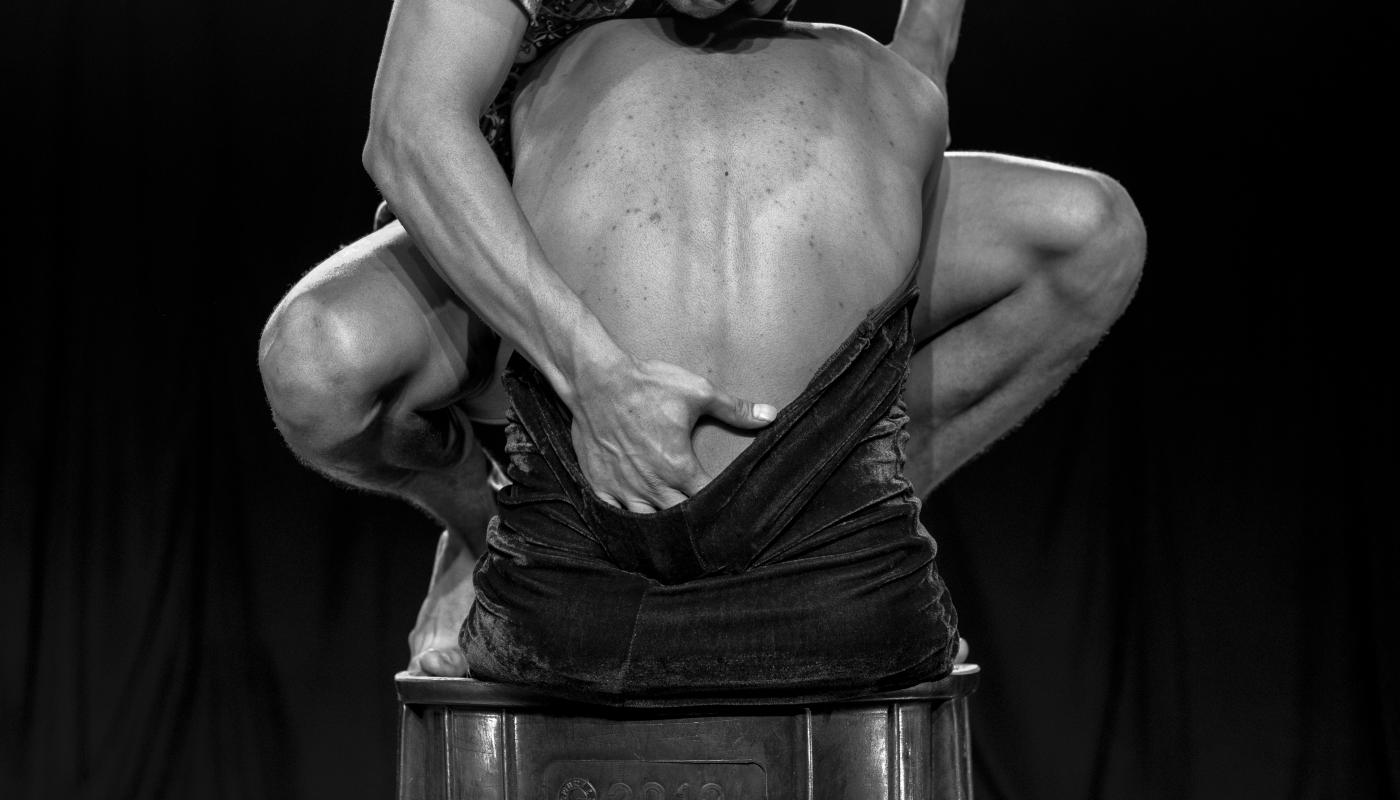 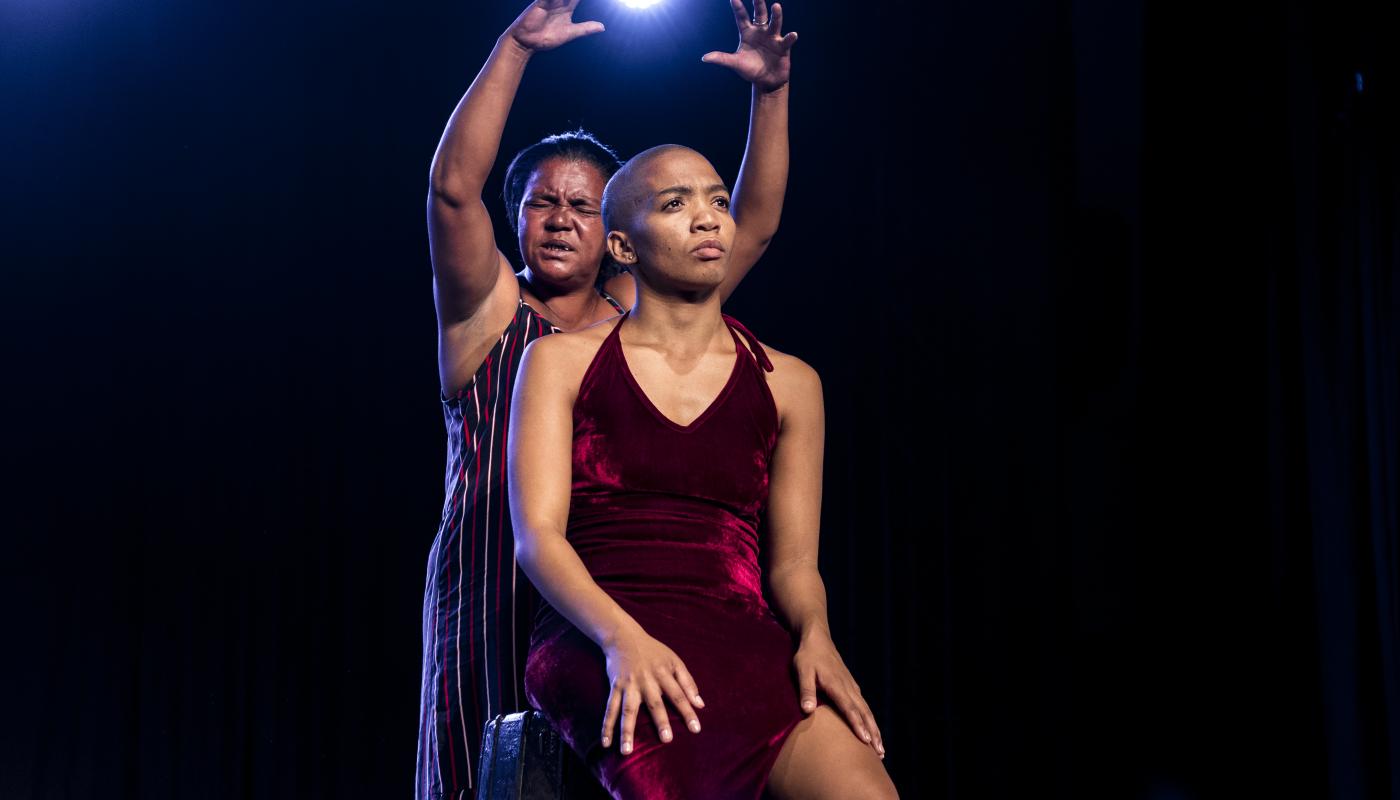 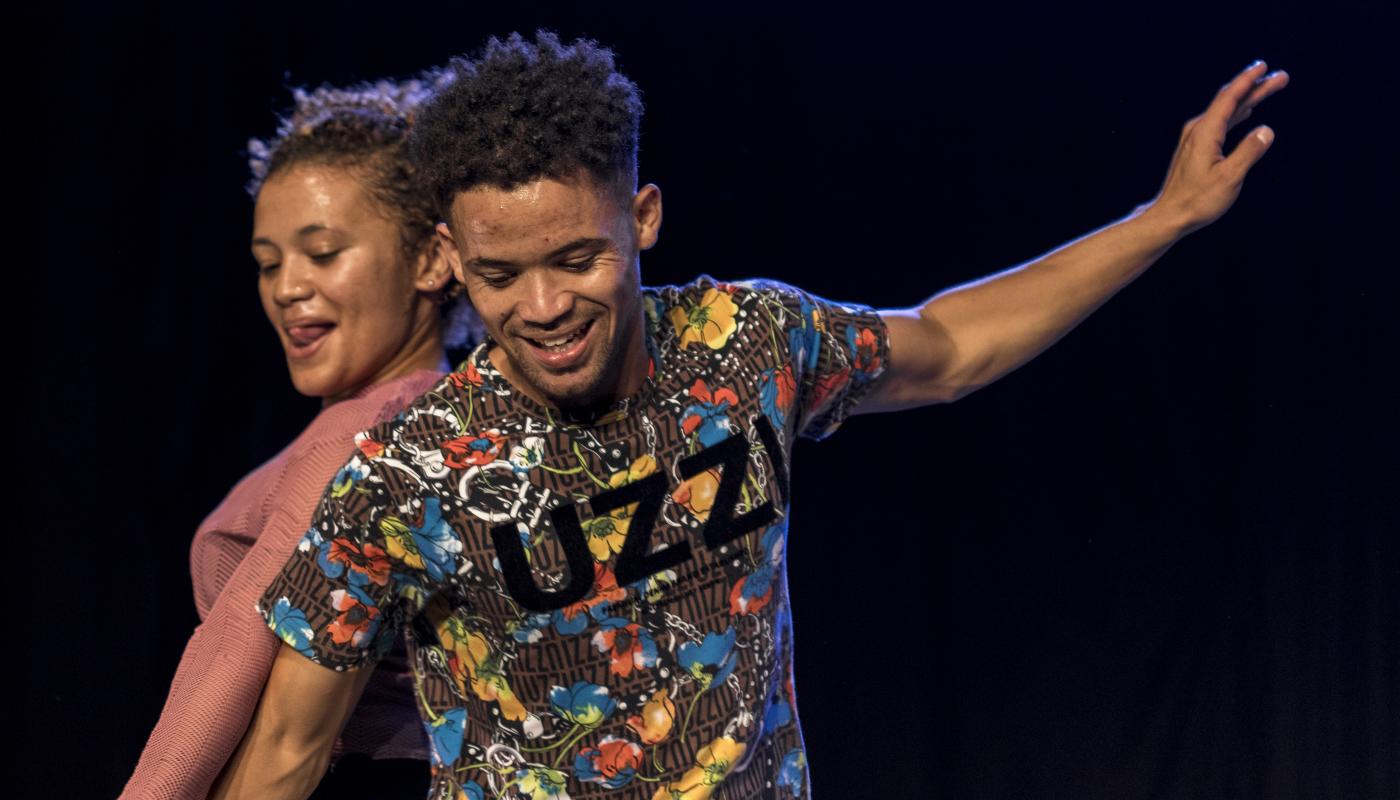 Krummelpap, Scandals Wrapped in Prayer (Krummelpap, Afval en Sunlightseepbaddens is a dance-theater piece created and performed by Garage Dance Ensemble, which makes its home in a former mining area in the Namaqualand region of South Africa, not far from the border with Namibia.

Set in a specific place and time about a particular brown community geographically far from our own lands, Krummelpap is a devised work of raw emotion and dark humor. it unfolds universal stories of young people reckoning with the past and confronting conditions of the present to self-define and celebrate who they are and who they would like to be.

An uncompromising text by award-winning poet Ronelda Kamfer is the soundtrack of the work. The movement spins out of these verses to capture the personal and political circumstances and aspirations of the coloured peoples of South Africa’s Northern and Western Cape -- descendants of slaves, Dutch slave owners, and the indigenous Khoe-San.

This full-length dance-theater production debuted at Woordfees 2020 in Stellenbosch S.A., and toured to Afrovibes 2021 in Holland. It has also been performed in Namaqualand at local community events and O’Kiep High School.

As described by Afrovibes: “Krummelpap is a dance performance that tears off the plasters from the wounds of the coloured peoples of the Western and Northern Cape in South Africa. The dancers conjure up a reality that moves across your skin like sandpaper.

“With a compelling virtuoso style, they dance with their text and their language, making the social content of their story accessible and tangible. This dance performance makes you cry, laugh, feel uncomfortable but it also sends messages of hope.”

About the title….Krummelpap (crumbly porridge) is a staple dish for South Africans young and old, regardless of race or class. Like American grits, it’s made of corn meal and water and often eaten for breakfast but is a cheap and filling comfort food at any time of day or night.

For the production’s U.S. debut tour with Center Stage, the original text, written in a dialect of Afrikaans, will be translated by the author, and presented in English.

“Our Families hide their scandals in prayer

And they who are teeming with secrets close their eyes…”

Ronelda Kamfer, from her text for Krummelpap, Scandals Wrapped in Prayer

Knock-out Northern Cape-based company centers the lives of young South Africans and the legacies they bear with a deeply personal and socially charged dance-theater work.

Garage Dance Ensemble is adept at creating from absence, at mounting rich and riveting performances in blank spaces like community halls. Making art meant to merge and reflect its community, Garage’s work is essential by necessity – and by choice. It’s immediate and raw, filled with passionate presence and clear, expressive movement. When you watch Garage’s dancers, you’re witnessing embodied thought and feeling.

In many ways, Garage traces South Africa’s recent past and current circumstances. Its home is O’Kiep, a remote former mining area in the Namaqualand (Northern Cape) region of South Africa, not far from the border with Namibia. Its dancers are youthful co-creators in the Ensemble’s work, many of them hailing from backgrounds still too rarely featured on South African mainstream stages. Its founders are Alfred Hinkel and John Linden, two of S.A.’s most influential dance makers and company directors, perhaps best known for their decades-long work leading Cape Town’s Jazzart Dance Theatre to be one of the most important cultural and creative centers. From 1986-2010 they pioneered a teaching and performance ethos firmly rooted in the progressive ideological principles of the South African anti-apartheid struggle.

Garage, laser-focused on its community, has rarely left its home turf. Now a five-dancer ensemble is coming to the U.S. for the first time, bringing one of their recent pieces. A work that combines stark poetry and powerful movement, Krummelpap, Scandals Wrapped in Prayer (originally Krummelpap, Afval en Sunlightseepbaddens) showcases the company’s unique approach to tell the stories of young people reckoning with the stigmas, violence, and rage of a damaged and disenfranchised community.

Garage Dance Ensemble will bring Scandals to the U.S. in 2023-2024 as part of Center Stage, the cultural exchange program that has connected performing artists from abroad with American communities since 2012. Six other music, theater, and dance ensembles from South Africa, Ethiopia, and the Philippines will also make independent tours or hold in-depth residencies with the program, promoting global ties and engaging with audiences on stage, off stage, and online. Center Stage is produced through a public-private partnership between the U.S. Department of State’s Bureau of Educational and Cultural Affairs and the New England Foundation for the Arts.

In 2010, Alfred and John moved back home to Namaqualand and settled in O’Kiep. There, communities still struggle in the aftermath of exploitative copper and other large mines that resulted in environmental desolation, high unemployment, and persistent poverty.

There was little for young people to do, and there were no theaters or publicly accessible arts activities. Alfred and John created a dance studio next to their house and opened it to all members of the community. They dubbed the ensemble that sprang from the space “Garage,” not because of the building, but because of what happened to those dancing there.

“A lot of healing is required in this area, in particular with the youth,” Hinkel reflects. “We realized people were coming to the studio to get their (human) engines repaired.” The tune-ups that happen at Garage now draw talented young dancers from across the country, though many in the company have roots in the Northern Cape.

The reason dancers flock to a remote former mining town in a somewhat desolate corner of the country: Garage’s approach to dance making. The company embodies the Afrocentric dance philosophy and methodology that Hinkel pioneered: it centers the individual body to build vocabulary born out of contact improvisation, multiculturalism, the exploration of African rhythms, indigenous traditional and urban forms, and local languages woven into the text. “Dance can be otherworldly, but we’re inspired by the community and it’s important that the community sees itself on stage. We’ve tried to get rid of the icing sugar, the artifice,” Hinkel says.

Continuing a practice of integrating text, Garage’s prompts and creative material is in the dialect of Afrikaans used by people of color in the Western and Northern Cape. Says Hinkel, “that helps to demystify the dance, though you still retain the magic of dance.”

And instead of insisting the body conform to rigid formalism, Garage starts with the dancer’s body and sees where that body’s shape and natural inclinations take the dancer. “It makes sense to start with a person’s body,” notes Linden. “As that person learns their body better, you get movement out of them you’d never ask for as a choreographer, that you’d never thought of. It’s better coming from the dancer.”

Garage’s dancers’ practice moves from training and improvisation to co-creation. “We do regular ritual and improvisation. Rhythm and repetitive action can bring about an altered state of mind. The energy, the brainwaves are working differently,” explains Hinkel. After invoking this different mind state, the process moves to interactive work to pull out imagery to use with a particular text. The final choreography is rooted in the dancers. Says Hinkel, “By the time you’ve constructed the dance, you have no idea what came from whom.”

Dancing Between the Personal and Political

Scandals is the most recent work created through this process of collective choreography. At its heart lies a long, searing, and wide-ranging poem by South African literary star Ronelda Kamfer, commissioned by Garage. Both words and movement vocabulary speak the local language, without flourishes and theatrical trappings.

Scandals fearlessly bares the emotional dynamics between generations struggling with poverty and discouragement, environmental degradation, and social chaos, through the eyes of youth. Kamfer sees many of the same struggles in her own life, struggles the dancers confront head on. Both the text and production design serve truth raw, distilling it to the essential.

The work is highly specific to the community it engages, yet the movements, words, and emotions hold universal resonance: Shame and violence, longing and resilience run through the work. To allow for unmediated connections in the U.S., Kampfer is reimagining her text for Scandals in English.

Though rough and unsettling in its tenor and subject matter, Scandals has moments of joy and exuberance, tension and release. “We get to a deep dark space at moments in the piece, and then it’s time to release the audience a bit,” says Hinkel. “After one particularly intense section, we included a duet to a love song and later on a duet to local traditional music, in traditional costumes.” This isn’t a sideshow, however: “In the former we decided they would never actually make physical contact, so that the audience can make up their own minds about what it means. Is the male partner really there or in her imagination?”

The work’s title brilliantly distills. Krummelpap is South Africa’s staple dish, eaten by young and old, rich and poor, urban and rural, white, coloured, and black. Like American grits, it’s a porridge of corn meal and water, most often made for breakfast -- a comfort food loaded with sustenance, and also with strife.

“Americans will see the relatability of the work,” explains production manager Heloine Armstrong. “As colored people in South Africa, we have a similar socio-political experience to African Americans. Beyond that, there are many universal themes in our work as well. A diverse audience can relate to it because it’s so personal.”

Garage Dance Ensemble is part of Center Stage, a public diplomacy initiative of the U.S. Department of State's Bureau of Educational and Cultural Affairs with funding provided by the U.S. Government, administered by the New England Foundation for the Arts in cooperation with the U.S. Regional Arts Organizations. General management is provided by Lisa Booth Management, Inc.