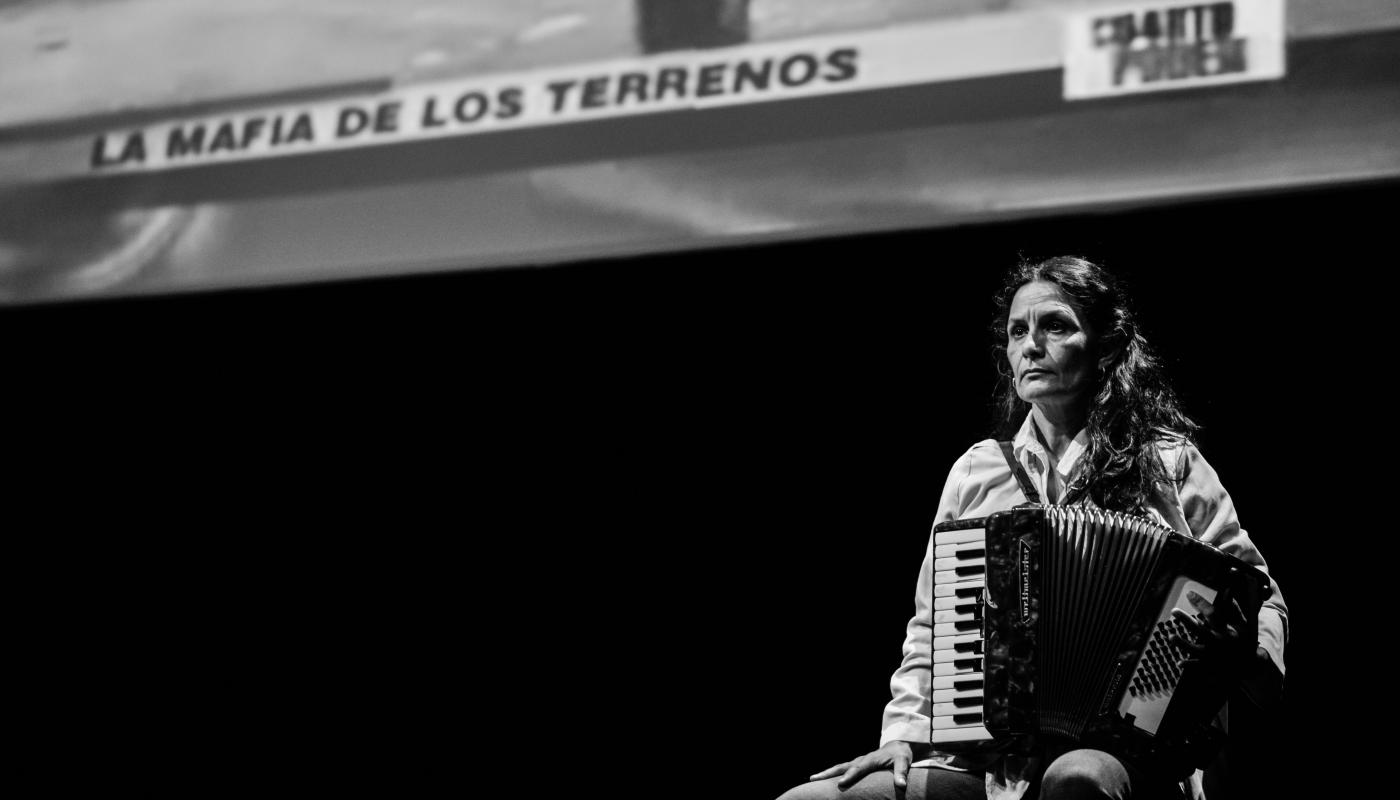 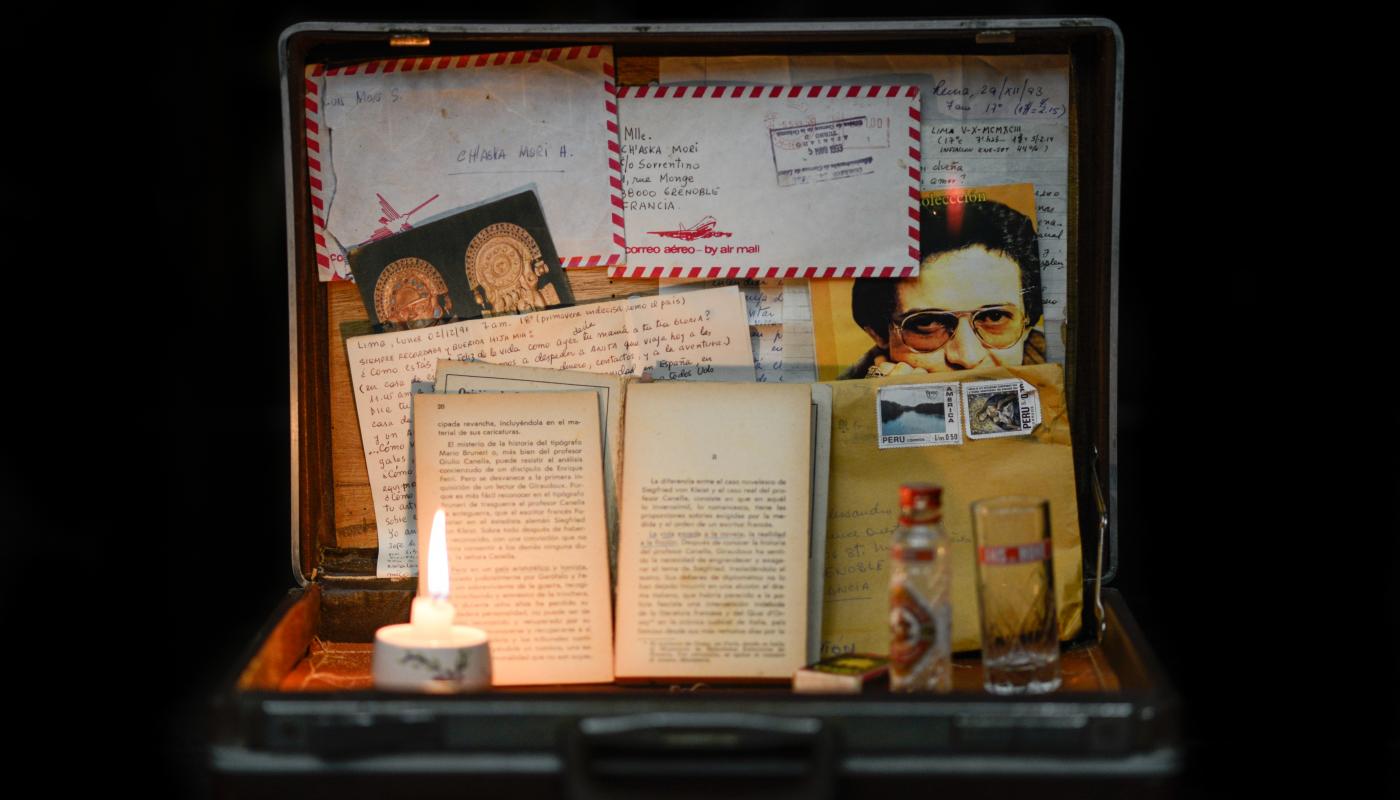 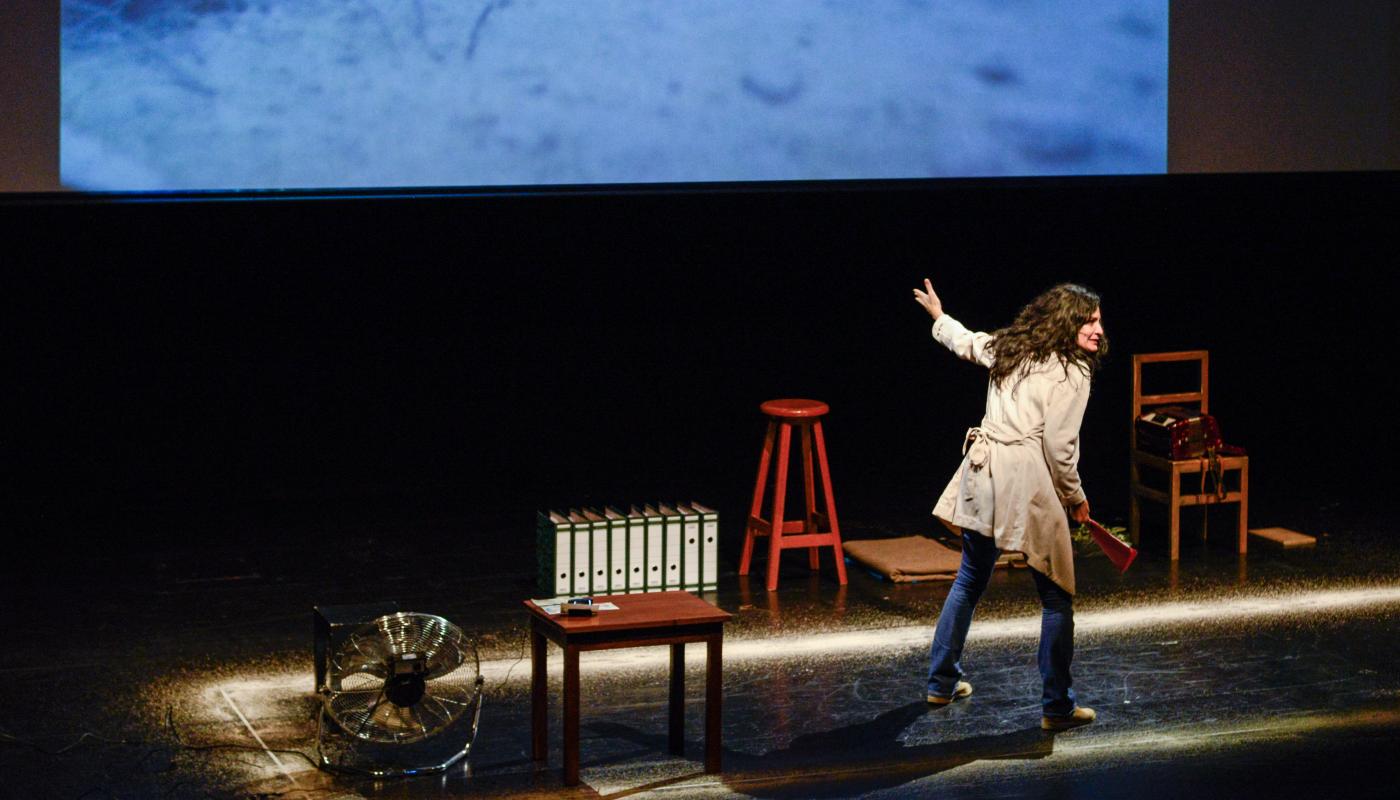 A Peruvian documentary maker starts researching corruption in her country but ends up directly involved in the story.

Chaska Mori returns to Perú after the death of her father, who left her an inheritance with which she decides to buy a piece of land on the outskirts of Lima to build a house for herself. Before she can inhabit it, land smugglers invade it. She begins a judicial process and faces a system where the law of the strongest prevails. Her investigations lead her to an unsuspected family secret that will profoundly transform her.

“We are an ensemble of independent artists in Lima,” explains Mori, who together with Daniel Lagares founded Fílmico. “We are dedicated to exploring reality through the lens of documentary. Our three venues of research are photography, film, and theater. We are driven by the belief that, based on our subjective point of view, we can develop nonfiction narratives that expose the reality of life.”

“In a space between testimony and autofiction, Chaska Mori exposes the fine line between what’s legal, illegal and unfair in an everyday melting-pot that extends from families and to all levels of a fractured society. Only affection allows us to accommodate both illusory fiction and suffocating reality.”

“In a space between testimony and autofiction, Chaska Mori exposes the fine line between what’s legal, illegal and unfair in an everyday melting-pot that extends from families to all levels of a fractured society. Only affection allows us to accommodate both illusory fiction and suffocating reality.” - Santiago a Mil Festival, Santiago de Chile, January, 2020

Chaska Mori had returned to Perú after a decade in Spain working on documentary and other film projects. She decided to make a film about her family’s personal history. She was in the middle of gathering materials, when the phone rang late one evening: Strangers with a front loader had knocked down a wall and taken over a small plot of beachfront land she owned.

The years-long Kafkaesque legal battle that ensued, and the family secrets that surfaced in the process, inspired El apellido comienza conmigo/The Last Name Begins with Me. The multimedia production incorporates film and still images, sound design, gripping storytelling, and live performance to document the personal, political, and social territories where corruption and patriarchy intersect and collide.

“This is a story told by a woman in a man’s world, and against a backdrop of a legal fight for justice,” Mori explains. “It’s a world where the strongest survives and wins. The story is also a story about truncated patriarchy. It’s a mirror of our society. The ones who hold the family and our communities together are women. Men hold the power, but are often absent. The same thing happens at the highest levels, so the microcosm is a metaphor -- and the starting point of our story.”

El Apellido is distinctly personal in its accumulating detail. “I started to build this story from the images, from the audio-visual materials I had. I also had a lot of objects: my dad’s letters, the maps of the plot of land, lots of paperwork related to the legal battle, lots of material objects. I started to build the text from those objects.”

This concrete approach to storytelling contrasts powerfully with the increasingly surreal, eerily poignant tale of how a tragic abandonment of Mori’s father intertwined with the bureaucratic nightmare of reclaiming rightful ownership. As the narrator begins to question her own perception of reality, the visual elements present stark counterpoint to the ever stranger and rawer narrative. The film elements are an integral voice in the telling. All comes together in a balance that reflects the strengths of meticulous documentary film making and the emotional impact of the stage.

Without working systems, webs of informal networks dispense or withhold justice, and come to oversee all aspects of society. “If it were only about public corruption it would be hard to sustain as a story,” Mori says. The interwoven personal and social issues are visual, dramatic, even for audiences with radically different contexts and experiences. But that entanglement can also have an additional effect on audiences, one Mori striving for: “It awakens the citizen’s sense of power.”

Fílmico, Mori’s Lima-based interdisciplinary company, will join four other ensembles from Colombia and Perú that will make independent tours of the U.S. from July-November 2021 as part of Center Stage, a cultural exchange program that invites performing artists from abroad to the United States to perform, meet, and share their experiences with communities around the country. The fall 2021 U.S. premiere of El Apellido comienza conmigo is being scheduled now.

“We are an ensemble of independent artists in Lima,” explains Mori, who together with Daniel Lagares founded Fílmico. “We are dedicated to exploring reality through the lens of documentary. Our three venues of research are photography, film, and theater. We are driven by the belief that, based on our subjective point of view, we can develop nonfiction narratives that expose the reality of life.”

This interdisciplinary approach comes with a flexibility in form and material that was integral to making the work. Now, in a COVID-19 world, it is providing necessary resilience and opportunity. “We premiered the work in 2019 in Lima,” says producer and tour manager Claudia Córdova Zignago. “Festival Santiago a Mil” in Santiago de Chile hosted us in February 2020 in what was to be the first of several appearances at important festivals abroad. Then everything closed down.” Rather than cancel a scheduled Spanish premiere, Barcelona’s Grec Festival commissioned Mori to make “El Apellido comienza conmigo. Variation 2,” a 30-minute film which premiered in July 2020; the festival plans to host the stage version in May 2021. “We’re now playing with ideas around physical and virtual installations, and serial, online encounters. Of course we want to present the play -- but we are excited to discover and share new and expanded ways to tell this story.”

Mori had gained extensive audio-visual and film experience in Spain. She also has a strong background in theater and playwriting. When she returned to Perú, she joined forces with Daniel Lagares and founded Filmico. They created installations to challenge urban Perúvians’ perceptions of rural Andean life, and made a film about the struggle to identify massacre victims from the Perúvian Civil War (La Búsqueda/The Search). Mori’s film about her family history--the peculiar, traumatic web of relationships and silences surrounding her grandfather--was also underway, when the project was transformed. Mori decided it had to be a play.

To move the research materials and audio-visual material to the stage, she worked with an acclaimed Mexican theater company, Lagartijas Tiradas al Sol, known for their skill in documentary theater. As Mori traveled to Mexico and they came to Perú, they collaborated to turn a growing text into movement. “They helped me translate these things to the stage and the body,” Mori notes.

On tour as a group of 4. Running time: 70 minutes without intermission. Recommended for audiences 14 and older. Performed in Spanish with English titles.

Fílmico is part of Center Stage, a public diplomacy initiative of the U.S. Department of State's Bureau of Educational and Cultural Affairs with funding provided by the U.S. Government, administered by the New England Foundation for the Arts in cooperation with the U.S. Regional Arts Organizations. General management is provided by Lisa Booth Management, Inc.