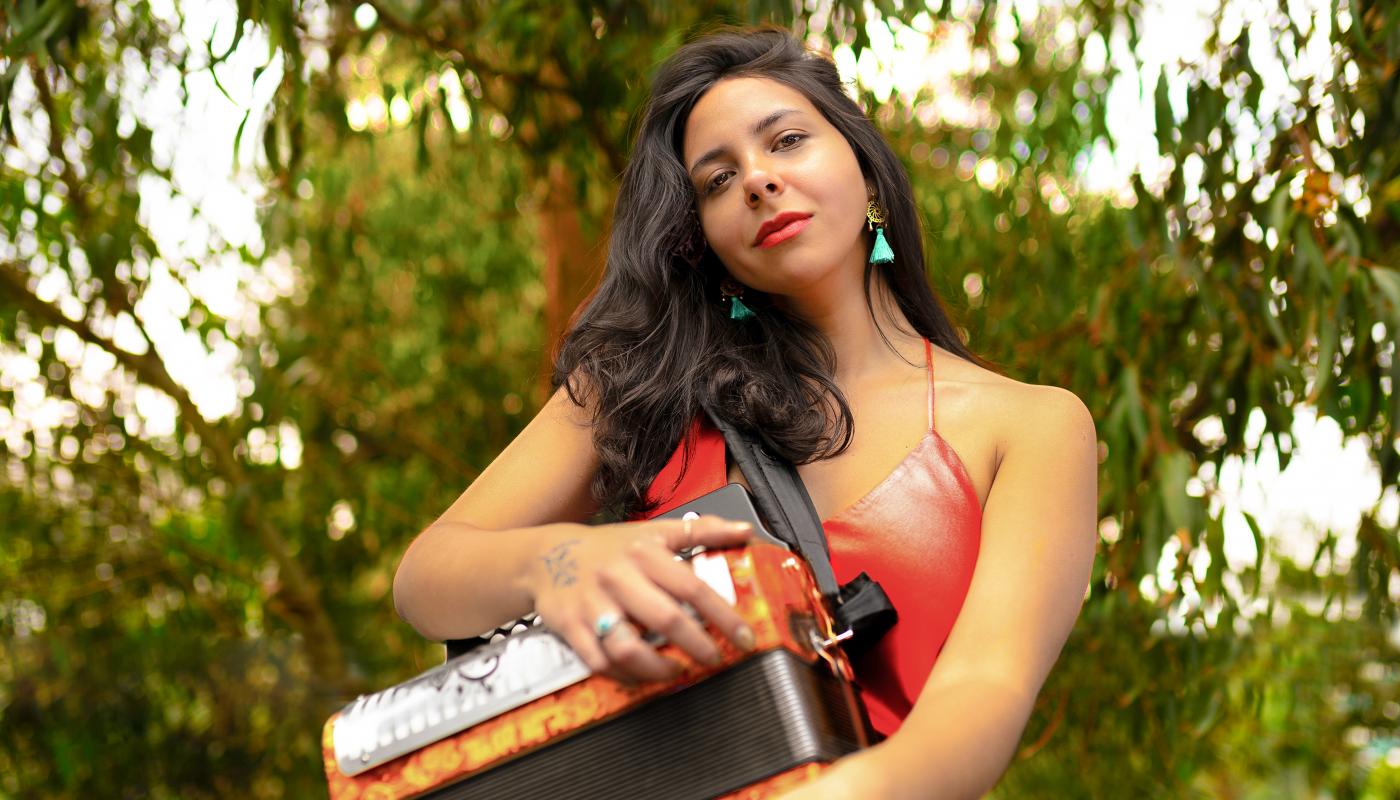 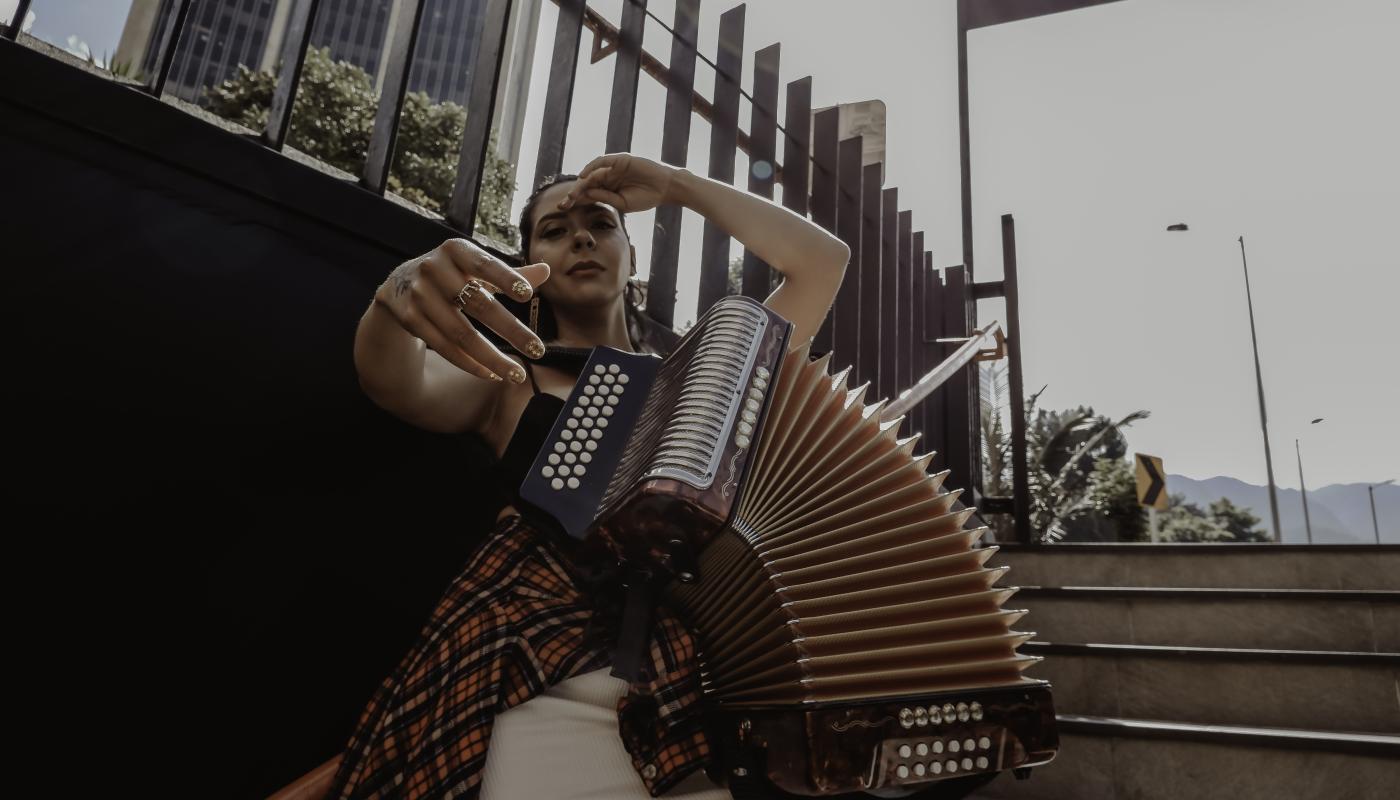 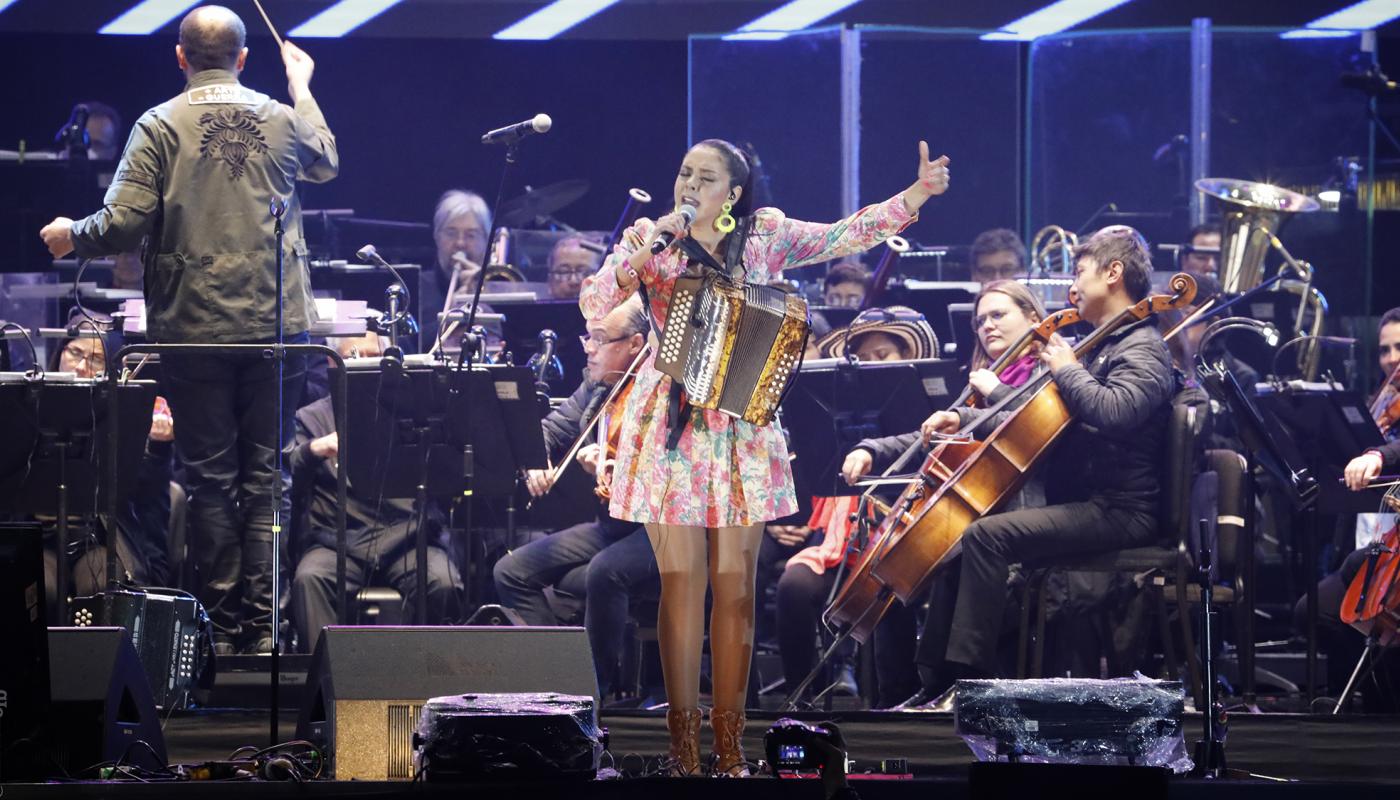 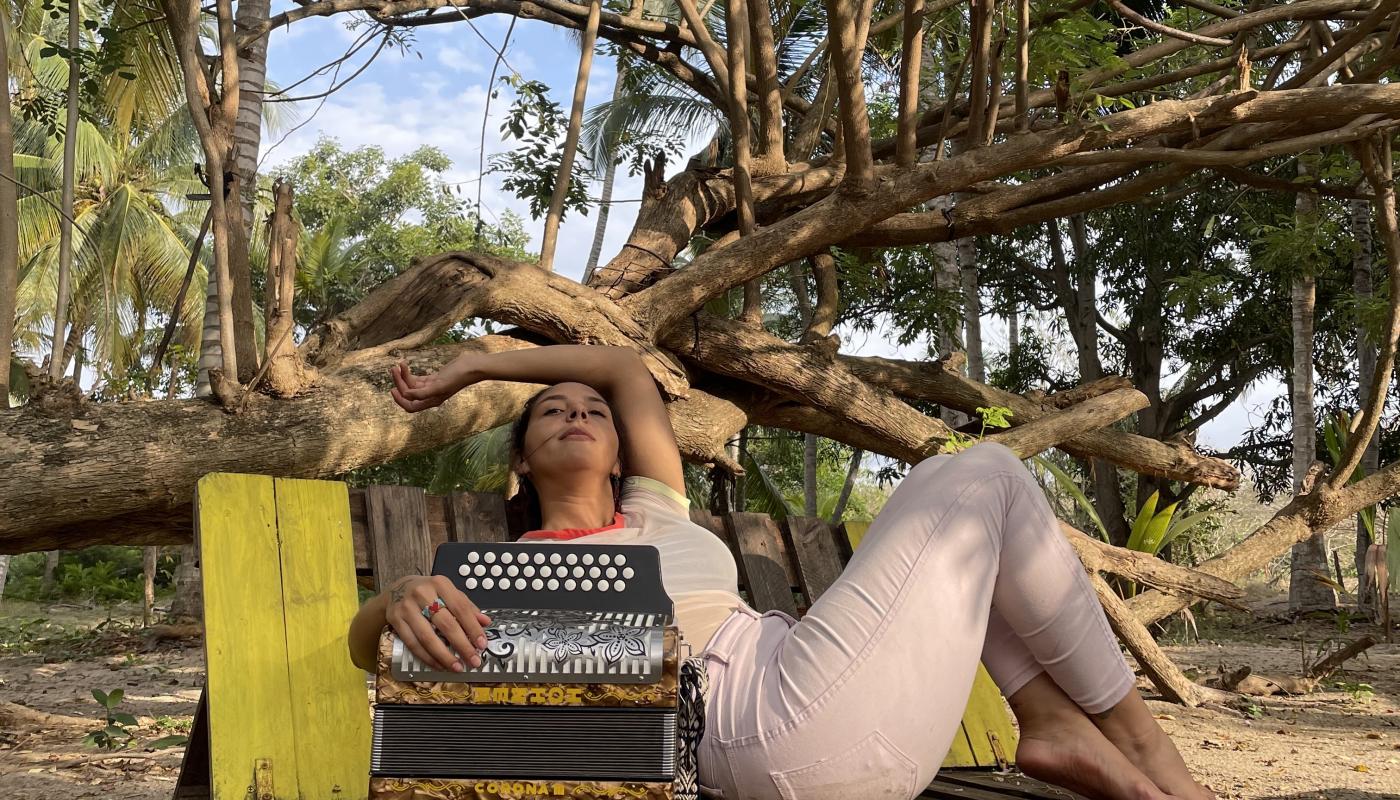 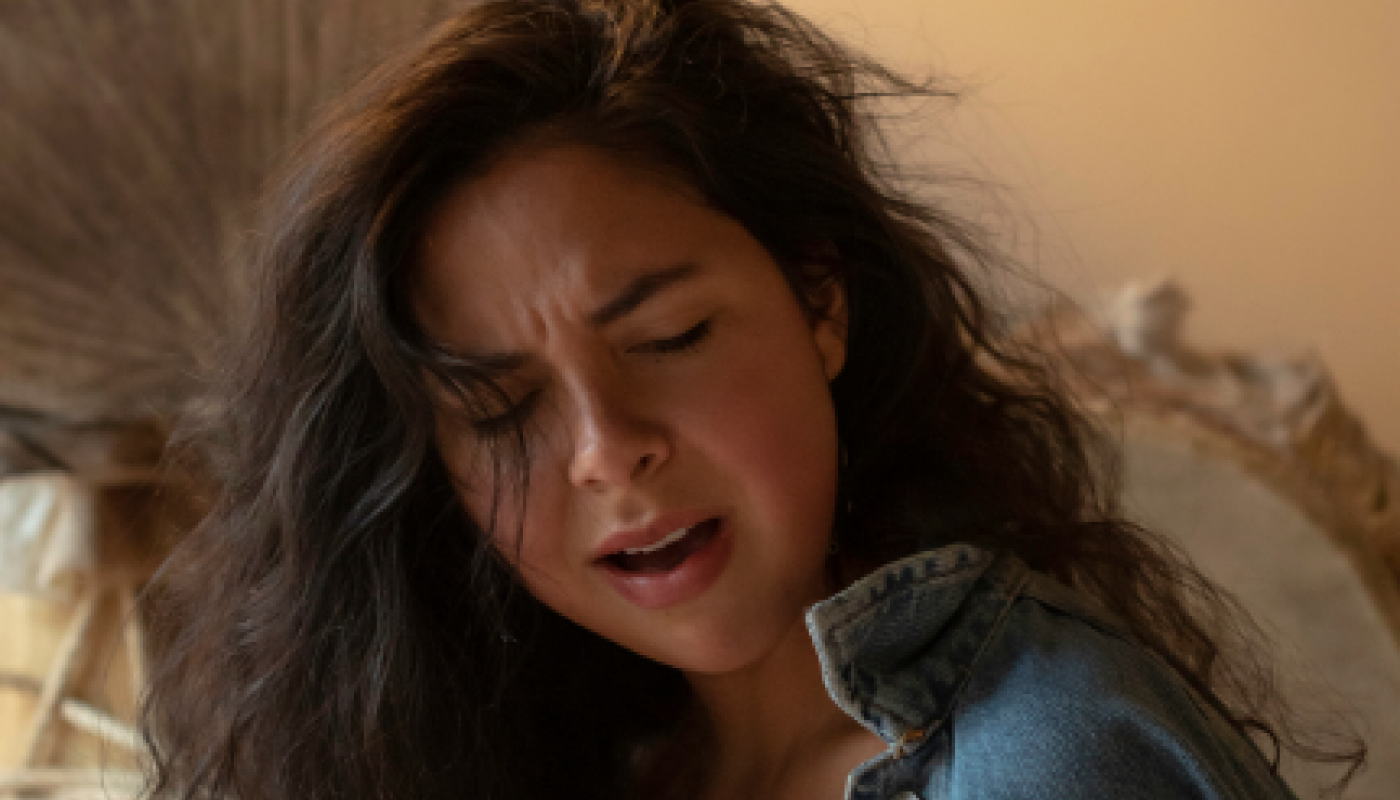 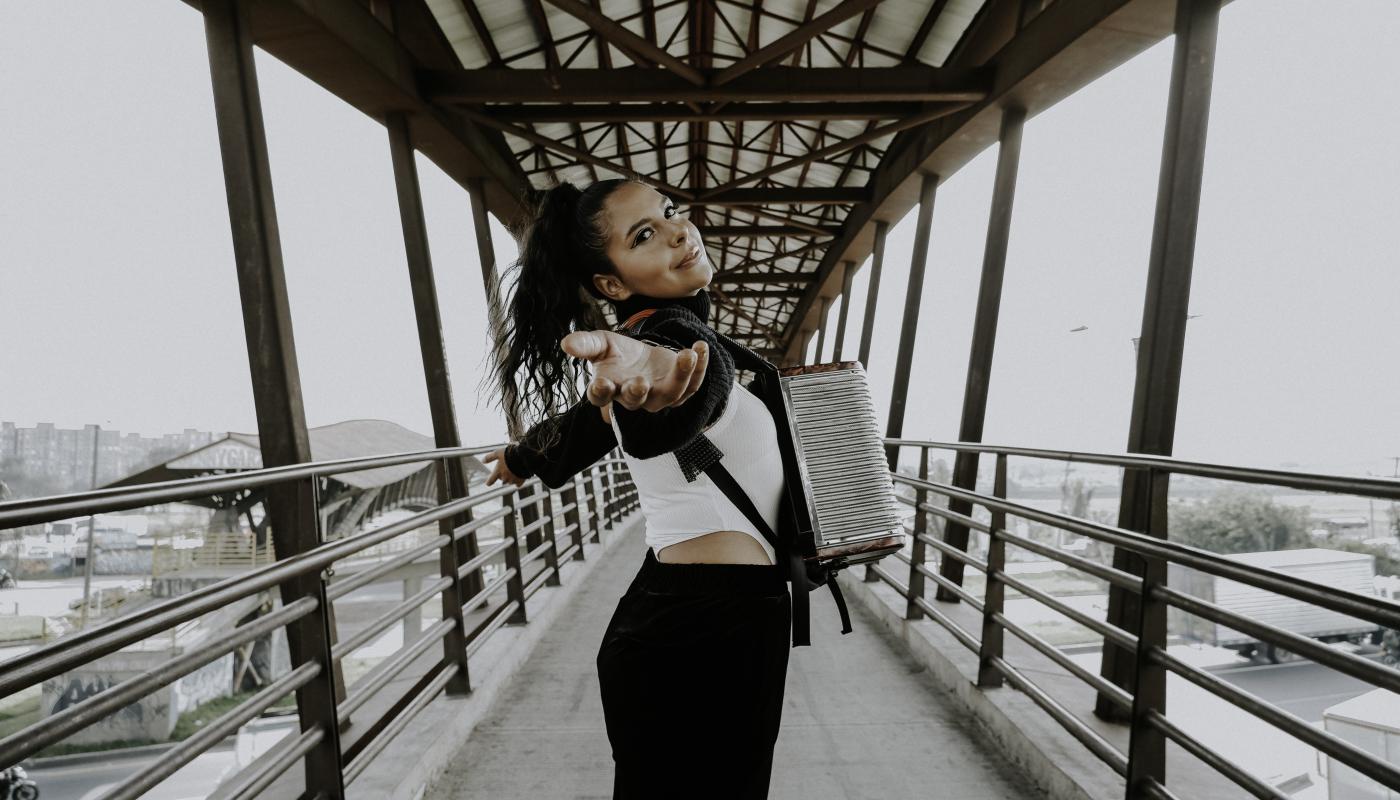 “I travel. I travel and dream about traveling the whole country to find those bits of truth that are at the heart of Colombian music. I love and respect these traditions, and the masters who have mentored me. But they are men – in the countryside, and in the university! The rhythms and the melodies are part of me now, and deserve to be celebrated, but I can see how to add to this legacy - to create, to compose, to share my truth, as a woman, as a writer, as a band leader. As a Colombian.”

A charismatic rising star of the explosive and multi-dimensional Colombian music scene, Diana Burco is a singer-songwriter and accomplished accordion player. She is also a two time Latin Grammy nominee, most recently in 2021 for “Rio Abajo’” as Best Contemporary Tropical album. Her LP debut "Diana Burco," was nominated in 2018 as best album vallenato/cumbia, the first ever female nominee for what is considered the most important indigenous music of Colombia.

When the global pandemic cancelled a summer 2020 tour to the European Union and Africa, “we just kept going. I had recorded a new album before the crisis and we’re moving forward, changing up our strategy, focusing on digital outreach, staying in touch.”

“We are living in confusing times, in a stunning era, and it seems that the only way to be saved is if we remain together. I want the listener to enter the ocean by my hand, with all of our pains and fears. To go into the deepest part, perhaps to get lost, and come back safe and sound together.”

“Burco carries age-old sounds with the vision of a new generation.”

Indoors or out: concert halls to clubs, festivals and cultural centers. Projections and other visuals used depending on the venue. Excellent sound system; some backline required.

At a young age, Colombian singer-songwriter Diana Burco longed for a stronger musical connection to her homeland. She found it in the accordion. In Colombia, the instrument grounds many of the country’s gorgeous traditions--African, Latin, and indigenous--and plays a crucial part in the music of Colombia’s Caribbean coast. It became a portal for Burco, opening up both Colombia’s roots and the world’s sounds to her own, highly original musical imagination.

There was just one challenge: There were few women players. “The accordion gave me something that I had missed,” she recalls. “I wanted to connect with the instrument to connect with my country. It was really deep for me. But I didn’t find any girls playing accordion. It was weird for me. It was a shock, no girls!”

Burco went ahead and learned accordion anyway, finding and studying with several women players and becoming the first woman nominated for a Latin GRAMMY in the traditional cumbia/vallenato category. Mastering instrumental and song traditions despite skepticism from male players, she then pursued a conservatory education, learning the orchestration skills that enliven her work.

Burco expands the instrumental and timbral palette of the traditions she loves, weaving her own distinct perspective and storytelling into songs that feel light and polished, but with deep, earthy roots. Her sophisticated songwriting sparked a rapid career rise, including several album-length releases on a respected independent label, participation in cultural exchange initiatives like One Beat Colombia, and ample regional touring. She has released two albums, Diana Burco (2018) and Río Abajo (2020).

Diana Burco will join four other ensembles from Colombia and Perú that will make independent tours of the U.S. from February - May 2022 as part of Center Stage, a cultural exchange program that invites performing artists from abroad to the United States to perform, meet, and share their experiences with communities around the country. The band’s August-September tour, now in formation, will mark the band’s U.S. debut.

Burco’s fascination with the accordion led her to travel around Colombia’s Caribbean coast. Over the years, she learned whatever she could from local experts, some of whom became friends and collaborators like traditional cumbia maestro Carmen Torres, who appears on one of her latest singles, “Bailo mi Pena.”

She didn’t seek out her musical elders simply to copy what she heard, however. She wanted to transform it and let it speak in new ways. “I’m not just playing or replaying these beautiful songs,” she says. “If I just play them, I’m not changing anything. I felt I had to sing what I lived, what I felt. Then I could write in a unique way for women in this music. I feel Colombian, but I am very conscious of music’s power. I don’t like to limit it to classical or popular or traditional. If we mix, it’s more magical.”

The combination of Burco’s delicate voice and instrumental and rhythmic exuberance render her versions and explorations sonically intriguing, yet warm and welcoming. Her songs often incorporate unexpected bursts of colorful instrumentation, lush jazz-, electronic pop-, or classical-inspired arrangements by design, a way to speak through tradition. “At the university, I studied composition. I’ve been able to listen to all kinds of instruments that have inspired me,” she recounts. “We have so many different rhythms in Colombia, yet I also love melodies and harmonies. When I work with my producer Dany Jose Garces, who’s my musical soulmate, we often say, ‘Let’s try this, because what is the music saying?’”

Burco has discovered that the music has plenty to say about some of Colombia’s biggest challenges, including the gender inequality and stereotyping she herself faced down as an aspiring young musician. Though Burco has spoken explicitly about these issues at TEDx talks and in other public forums, as an artist, part of her mission, she feels, is to keep showing up and making excellent work. Burco hopes to set an example that encourages women in all kinds of creative endeavors. “The trouble is believing that we can do it. I see many people struggle with that. It’s a daily fight,” she muses. “I’m just doing and doing, trying to show this to other women, not forgetting that I need to evolve as an artist. I put a lot of pressure on myself. I feel we have to do double. But I’ll take it. Bring it on! It’s the purpose of life. It makes me better.”

For Burco, evolving as an artist has meant keeping an open ear for whatever sounds will enhance what the music wants to say. She feels inspired by the work of other artists updating their beloved traditions, from Esperanza Spaulding to flamenco innovator Rosalía. Though rooted in vallenato and cumbia, “I feel I could be anywhere,” she laughs. “I love connecting with anyone in any situation, because I always have something to learn. When I learn more, I create more.”

Diana Burco is part of Center Stage, a public diplomacy initiative of the U.S. Department of State's Bureau of Educational and Cultural Affairs with funding provided by the U.S. Government, administered by the New England Foundation for the Arts in cooperation with the U.S. Regional Arts Organizations. General management is provided by Lisa Booth Management, Inc. www.CenterStageUS.org

A rising star of the explosive and multi-dimensional Colombian music scene, Diana Burco is a singer-songwriter and accordion player. A native of Bucaramanga in the Andes mountains district of Santander, Burco has played and investigated Colombia’s traditional music since she was a child. She has traveled throughout Colombia searching out the country’s varied forms and expressions, and has studied and collaborates with the masters that interpret them.

This deep cultural fluency and her own wide-ranging contemporary explorations mark Burco as a 21st century troubadour charting an original path rooted in her country’s rich heritage. “In addition to songwriter and band leader, you can also call me a cultural backpacker determined to make traditional music from the coasts of Colombia visible.”

She is also a two-time Latin Grammy nominee, most recently in 2021 for "Río Abajo"' as Best Contemporary Tropical album. Burco’s self-titled and independently released debut album was nominated for a 2018 Latin Grammy in the Best Cumbia/Vallenato category, the first female artist to receive this distinction.

“It is an honor to represent Colombia – a country so rich culturally, musically influential, and globally connected. By calling myself a Colombian artist I feel a great responsibility to present the social and cultural realities as honestly as I can through my personal perspective and experiences. My music represents that struggle to continue opening paths for women, to seek that balance where we are protagonists and can continue writing history.”

Diana Burco is one of five ensembles from Colombia and Perú touring the U.S. from February-June 2022 as part of Center Stage, a public diplomacy program that has introduced and toured performing artists from abroad in the United States since 2012. To date, 29 groups from Algeria, Egypt, Haiti, Indonesia, Morocco, Pakistan, Tanzania, Ukraine, and Vietnam have made month-long tours from coast to coast. As hosted by colleges and universities, festivals, music clubs, and cultural centers, Center Stage ensembles reach large cities and small towns. They engage with communities onstage, offstage, and online through performances, workshops, and discussions, artist-to-artist exchanges, master classes, and community gatherings, and return home to share these experiences with peers and fans.

Diana Burco and her band can perform in a variety of venues from festival stages to concert halls and clubs. Technical information, current as of February 2021, sets out general conditions and can be modified to accommodate a variety of stages and circumstances while meeting the artistic objectives of the band.  View and download the rider at the link below.

Listen to these Diana Burco tracks via Spotify

Diana Burco is part of Center Stage, a public diplomacy initiative of the U.S. Department of State's Bureau of Educational and Cultural Affairs with funding provided by the U.S. Government, administered by the New England Foundation for the Arts in cooperation with the U.S. Regional Arts Organizations. General management is provided by Lisa Booth Management, Inc.