Completing the Arc – From Peshawar to Connecticut

Last month I had the honor of hosting Khumariyaan at Connecticut College in New London, Connecticut.  Khumariyaan (“The Intoxicators”) is a four-member band from Peshawar, Pakistan, whose music is hypnotic and propulsive and blends traditional and contemporary instruments.  I first met Khumariyaan in Islamabad in April 2013.  I was there as part of a four-person team to select Pakistani performing artists to tour the U.S. under the auspices of Center Stage.  During that first encounter my colleagues and I met with Khumariyaan in a meeting room of an upscale hotel – a very corporate environment – leather chairs around the table, which was set with pads, pens, water glasses, and small bowls of hard candy strategically placed – everything in order for a high powered business meeting; not the typical environment for a meeting with musicians.  We talked about Center Stage and what it would be like to tour the U.S. We asked them questions about their work and they asked us questions.  We tried to make it relaxed and friendly, but the bottom line was it was an interview.  Did we want them to tour the U.S. and could they compete in the U.S. arts market place?  They were also interviewing us.  Did they want to tour the U.S. and how would they be received?  Once the “interview” portion was complete the next step was to see them do their thing – perform – the “audition.”

Khumariyaan performed the following day at an International Youth Conference hosted by the U.S. Embassy and attended by 400 youth from Pakistan, Afghanistan and India.  There were two bands on the bill for the evening.  The audience sat and listened politely to the first band while continuing casual conversations.  When Khumariyaan took the stage the conversations stopped and at least half of the audience surged toward the stage to dance.  I was swept up in that surge and joined two-hundred plus 20-somethings to dance.  We had our answer; yes we wanted Khumariyaan to be part of Center Stage.  Their tour of the U.S. started about seventeen months later.

During the intervening months I gave a lot of thought as to how I wanted to present them in my community.  I wanted them to have varied interactions with various types of people; college students and faculty, middle school students, local musicians and the general public.  I wanted to have them over to my home for a meal and show them the same hospitality I had been shown in Pakistan.  I wanted to share my community with them, and give them a sense of what our life is like here.  I wanted people in my community to meet the individual members of Khumariyaan and gain a greater understanding of who they are and where they come from.  I also wanted them to enjoy themselves.  How could I do all of this in four short days and not run them into the ground?  I think we were able to accomplish it all.

As their tour began to take shape I was very pleased that their visit to New London coincided with Connecticut College’s Fall Weekend, which is weekend when young alumni return for “home coming” and the families of our students visit.  There was no better way introduce a large and varied audience to Khumariyaan’s music than to present them that weekend.  That concert was the culminating activity of their visit to our community, which started with a welcome dinner with students, faculty and community members, many of whom were key players in the other activities planned for the week.  It was a lively evening with good conversation and good food.  There isn’t a better way to welcome guests.  While in New London they met with students and faculty in internationals studies, global Islamic studies and music.  Each gathering brought new insights, perspectives and always lively conversation and discussion.  They were interviewed and performed on a live webcast hosted by our local newspaper The Day, which was broadcast from the Hygienic Art Park in downtown New London. They performed for and talked with 125 middle school students at the Dual Language Arts Magnet Middle School – the students were brought to their feet to dance to Khumariyaan’s music.  There were many high points to their visit. 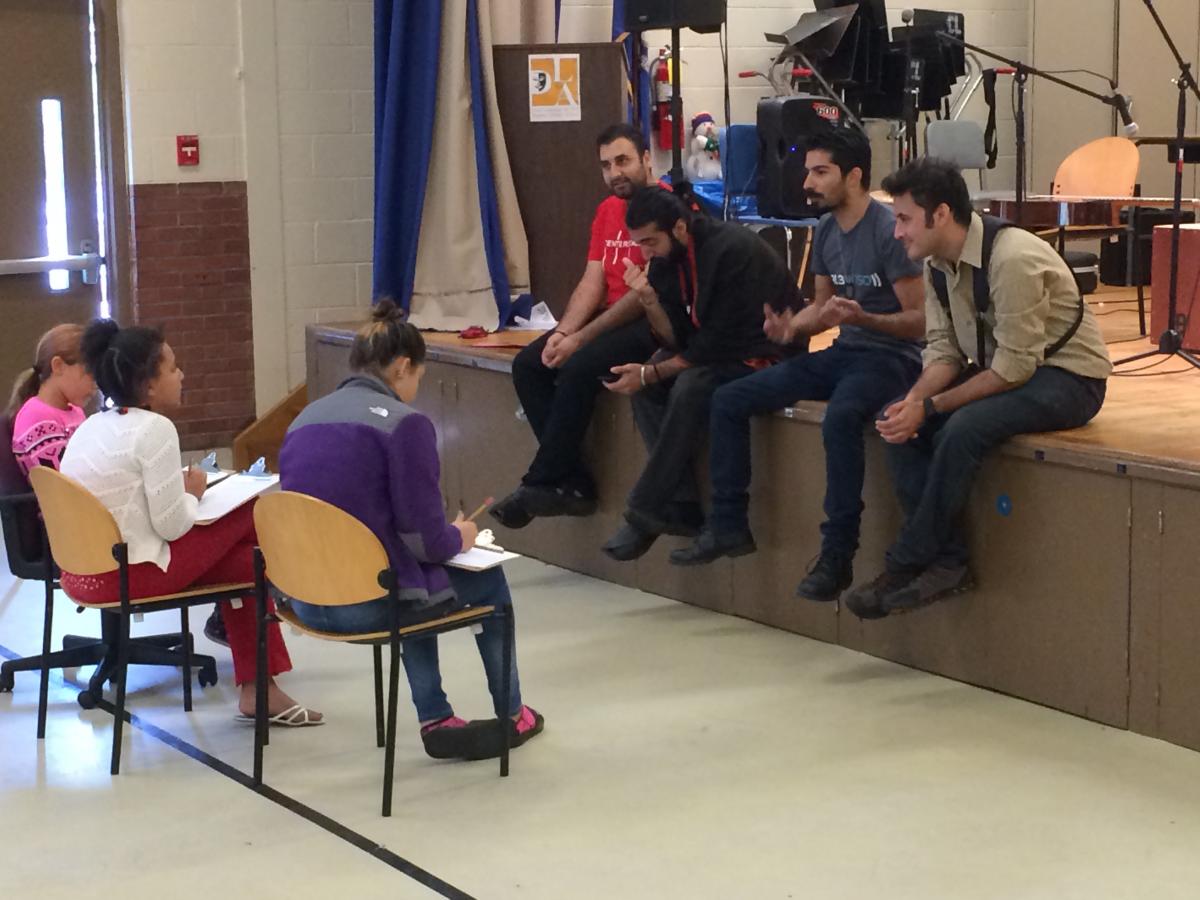 But the things that resonate with me the most are those moments of connection; person to person – conversations and laughter.  On one of their first days here Aamer, one of Khumariyaan’s guitarists, recalled their “audition” concert.  He mentioned their nervousness, but being reassured when the crowd jumped up to dance and he was reassured further when he looked into that crowd, and to his surprise, he saw me dancing with everyone else.  Another moment of connection was when I gathered local musicians together for an informal jam session with Khumariyaan.  Some of the local musicians were nervous and concerned about how late the night would go because they had their “day jobs” in the morning.  But once they all started to play the smiles and interaction were priceless – the music was wonderful. 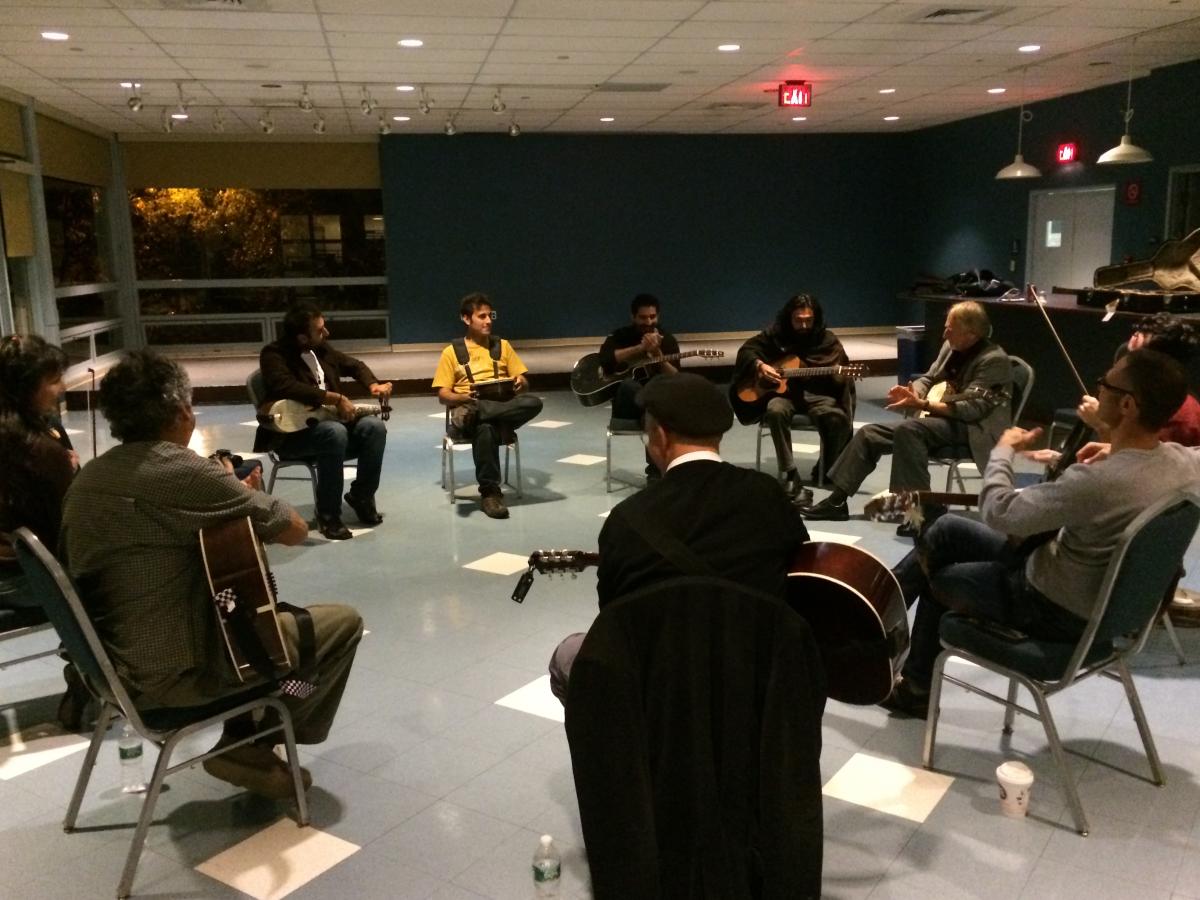 The night I had Khumariyaan over to my house for dinner I invited some of my closest friends to join us.  A few days prior I was having coffee with one of my friends and he expressed how nervous he and the others were about the upcoming dinner.  He was concerned that he might not know what to say and that he might say something offensive.  This is a man that I perceive as very outgoing, gracious and able talk to anyone.  I told him not to worry and to just be himself.  The night of the dinner I was in the kitchen cooking and everyone else was in the living room.  I could not really hear what was being discussed but it certainly was lively and interspersed with laughter; no one seemed to be at a loss for words.  Periodically someone would wander into the kitchen either to refresh a drink or to keep me company as I tended the paella I was creating on the stove.  Farhan lingered with me for a while and we had a wonderful conversation about families.  When we sat down at the table for dinner the conversation flowed without any awkward pauses.  It was a wonderful evening among friends. 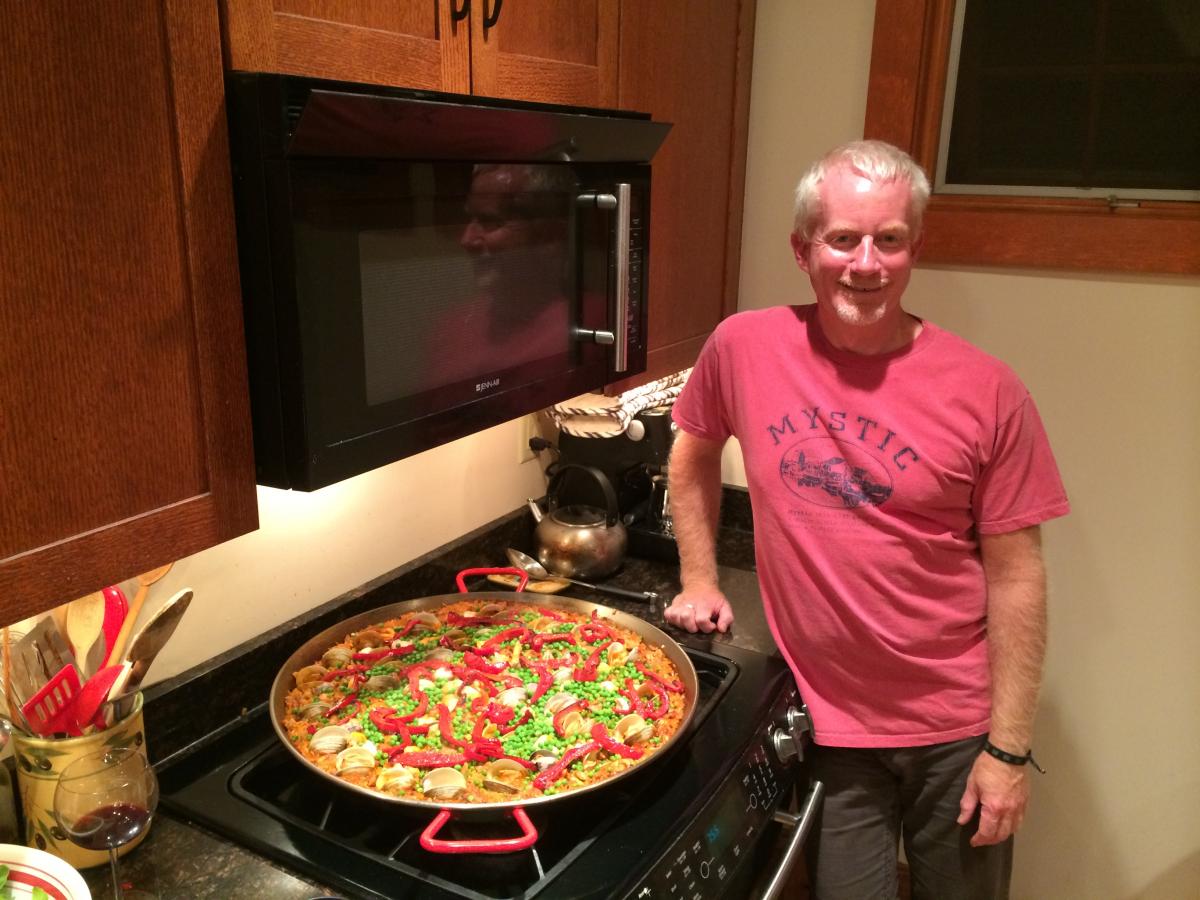 Earlier that day Khumariyaan arrived at my house before the other guests.  I wanted to take them for a walk into town.  I live in Mystic, which is a beautiful New England coastal town and the fall foliage was at its peak.  The Mystic River runs through the center of town and the two sides of town are connected by a drawbridge that goes up every hour.  It is one of the things that I love about living here; when the bridge goes up everything is at a standstill – you can’t be in a hurry.  We strolled downtown and stopped at the riverside park, just below the bridge, to hang out for a while.  A few friends strolled by and stopped to introduce me to their friends from Maine and I introduced my friends from Pakistan.  As we lingered I told Khumariyaan we had to stay until the bridge went up – it is a sight I still enjoy seeing even after living here for more than 20 years.  What I didn’t tell them is that there is a very loud whistle that is sounded to alert traffic just before the bridge is raised.  The whistle blew and they all jumped and then we all laughed.  I admitted that I knew it was going to happen, but decide not to tell them. 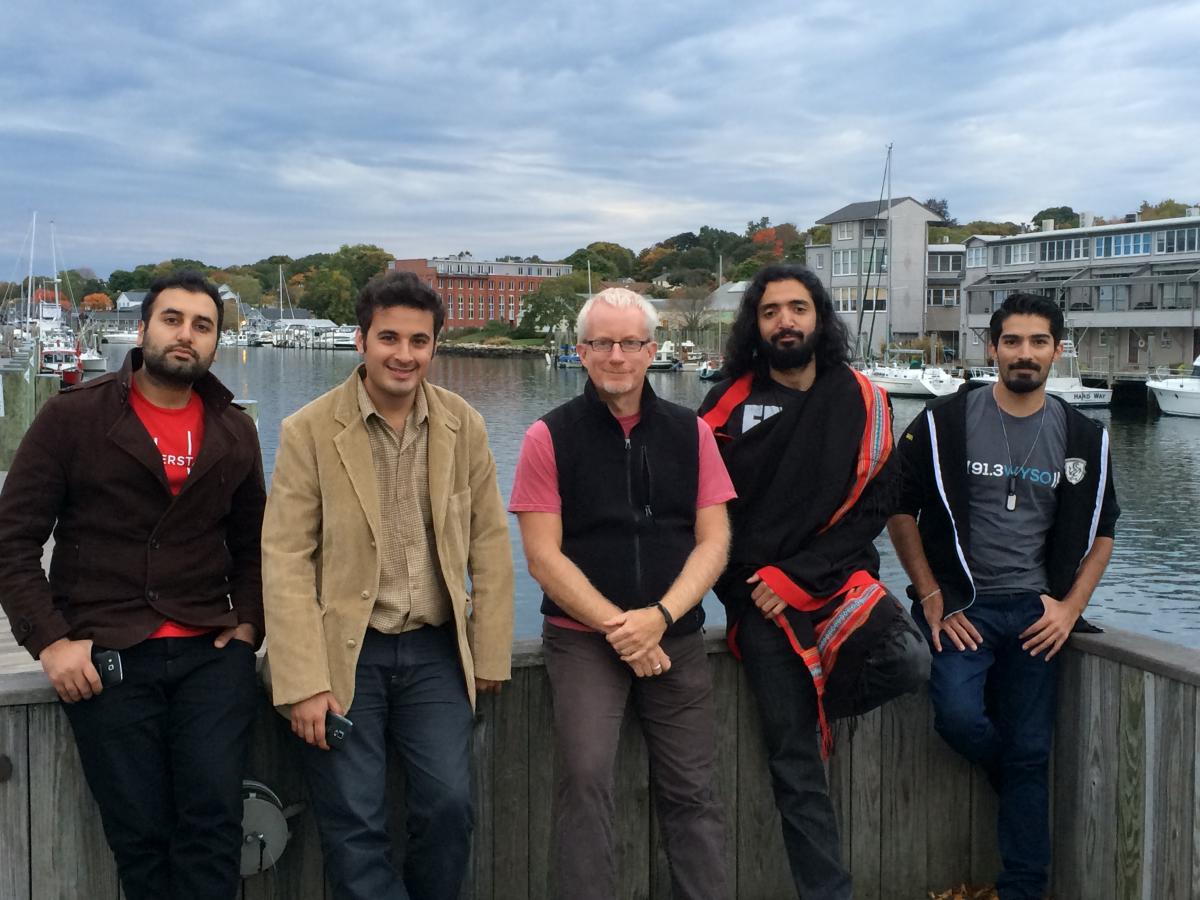 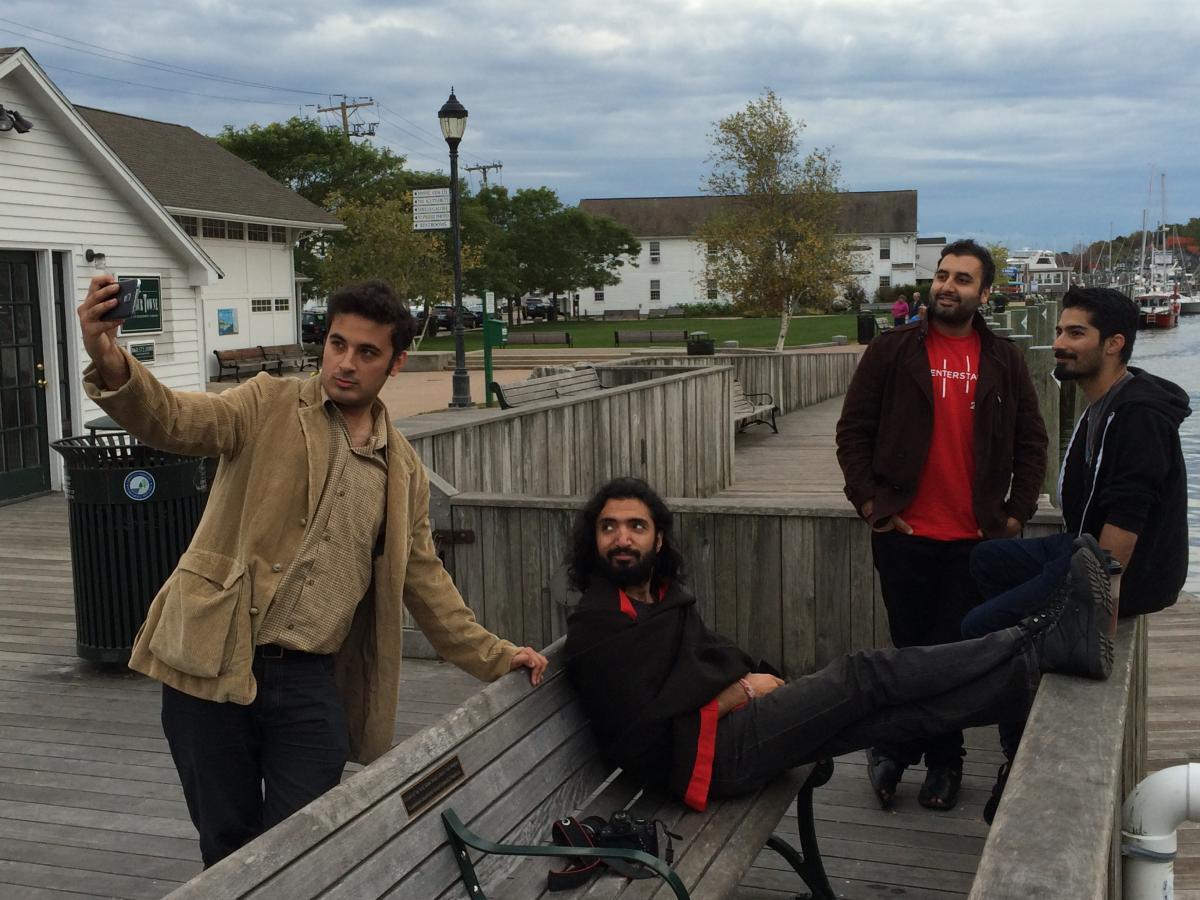 These are just some of the moments that I cherish about Khumariyaan’s time here.  Moments when people are sharing simple things – conversation, laughter, music, good food and more – just getting to know each other – hopefully understanding our differences and seeing that we are not very different at all.

The culminating event of their visit was the concert.  In preparation for the concert we created an area in front of the stage for people to dance; if they were so moved.  I had no idea if they would or not, but I wanted to provide the opportunity.  It is a labor intensive task for my small staff to create such an area, but they were very willing.  It was a wonderful concert and by the end, just as I had hoped, about a third of the audience was on their feet dancing.  I held back, feeling that I was in charge of the event and therefore I should stay back as an observer.  But that didn’t last very long I was drawn in and dancing with everyone else.  After all they are Khumariyaan, which means “The Intoxicators.”

Center Stage is all about making connections, creating understanding and making friends.  That certainly was done here; not just with me but with some many more in New London and throughout their tour.  I bid Khumariyaan farewell; looking forward to the next time we will meet – and thank you for the beautiful music!

All photos courtesy of Robert Richter